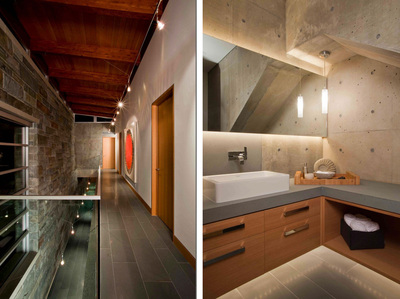 Things have been getting very interesting in Melbourne - where big risks are being taken to develop dynamic architectural pieces. Most recently is the Hill House which has spawned from experimental architecture firms,Andrew Maynard Architects.Design principals Andrew Maynard, Mark Austin, and lead architect Michael Ong, wanted to create a smart, yet playful home for their clients - a family of five with three small children. On the site, an existing structure had been built in the 90's, but Maynard's clients wanted to explore further to add on or fix their slightly problematic home.

The architects first challenge was to capitalize on the sunlight. "The site faces north therefore relegating the backyard, the family’s primary outdoor space, to shadow throughout the year," they noted. The team proposed the build of a cool new structure on the southern edge of the site. The new structure faces the sun, the pure cantilevered box above acts as the passive solar eave, cutting out summer sun, while letting winter sun flood in.

With the addition of this new structure, the backyard became a central common space for the family. The grass slopes up into the side of the home and creates a grassy knoll on the second floor as well. The slope idea was originally meant to be stairs, but the concept evolved into a hill after concluding that it is nicer to enjoy the sun on a slope, rather than stairs...and there, the Hill House emerged!