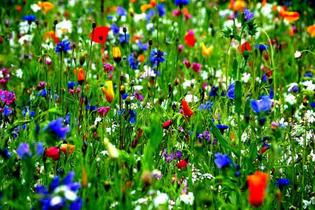 Wonderworks in Orlando, Florida literally turns Classical architecture upside down. The three-story, 82-foot tall building is flipped over with its triangular pediment squashed into the pavement. One corner of the Wonderworks building appears to flatten a 20th century brick warehouse. Palm trees and lamp posts hang suspended. The wacky design expresses the topsy-turvy activities that take place inside. The Wonderworks museum includes a hurricane ride with 65 mph winds, a 5.2 magnitude earthquake ride, and a Titanic exhibit. 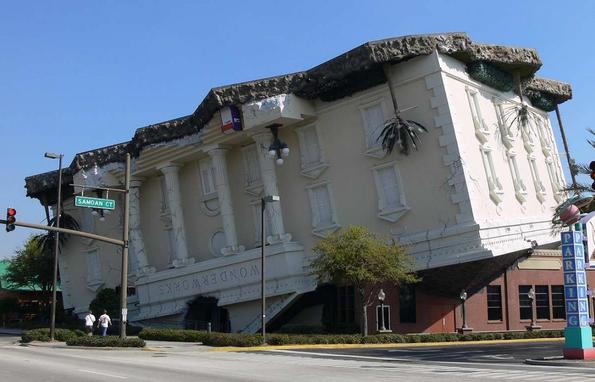 Crazy? Yes. And just a little bit funny. Anyone who would show so much respect for Microsoft by putting a window in their house just like the company's symbol must be a little odd. Computer geek? Or just a practical joker? 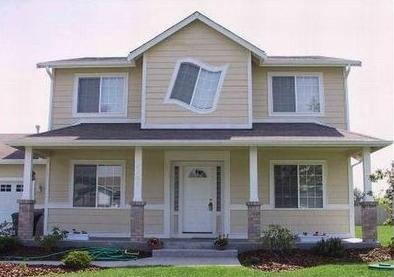 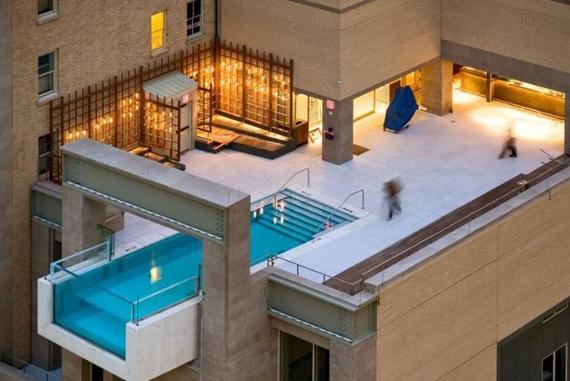 Congratulations for the architects, they've done a really great job, not only that it looks cool, but it's also funny! 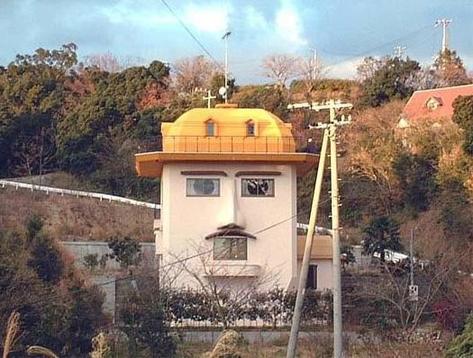 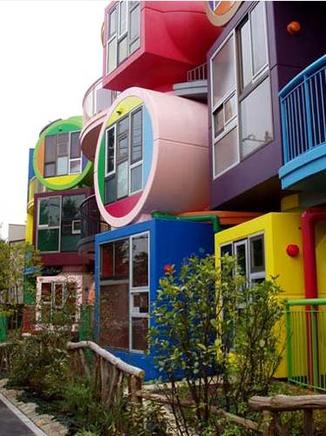 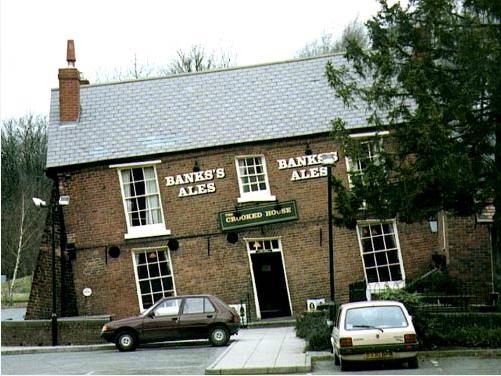 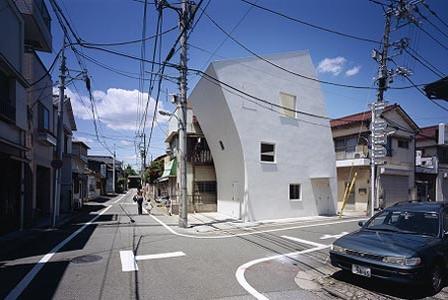 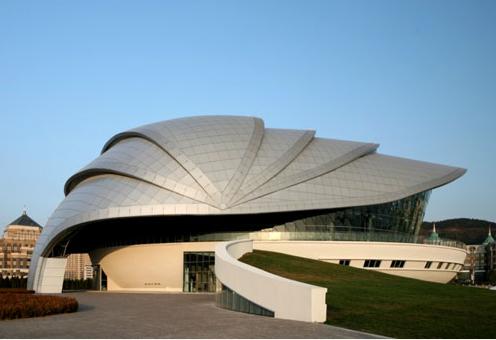 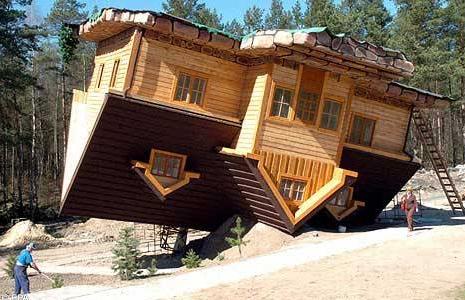 Located in Sopot, Poland, the “crooked house” was constructed in 2003. The building’s architecture is based on Jan Marcin Szancer (a famous Polish drawer and child books illustrator) and Per Dahlberg (Swedish painter living in Sopot) pictures and paintings. 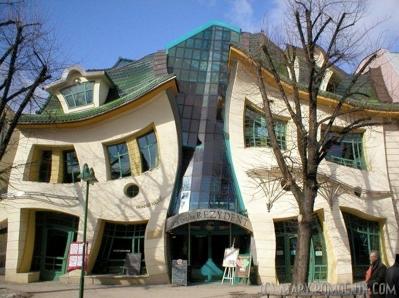 Completed in Madrid, Spain, in 2005, Hotel Puerta America is unlike your typical hotel. Conceived as an architectural showcase, this hotel commissioned a different architect to design each floor. Yes, each floor. Individual floors were outfitted by different world-renowned architects, including Foster and Partners, Zaha Hadid, David Chipperfield, John Pawson, Jean Nouvel and Ushida Findlay.

For the design of the fourth floor of the hotel, Plasma Studio created a series of crystallized spaces, with fractured and distorted rooms and hallways, using a “repetitive rhythm of partition walls, service ducts and entrance doors as a sectional framework from which a differentiation of the corridor skin was devised,” according to the UK firm. 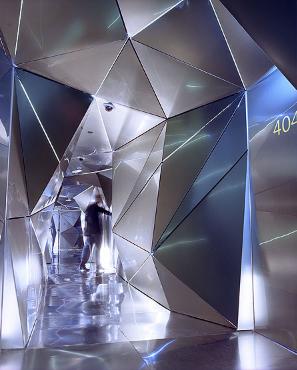 Though there are quite a few thin houses that exist around the globe, this particular Thin House is located in London, UK. 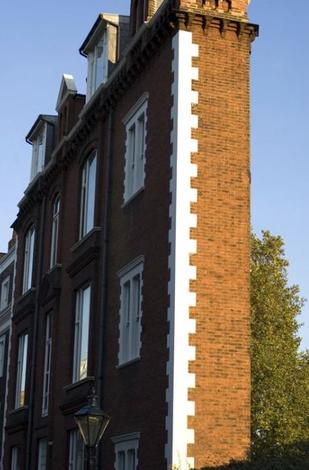 The northern German island of Usedom is known for its spa culture, its nudist resorts and for its beaches with sand so fine it “sings.” But there’s also a more unusual attraction here: the upside-down Die Welt Steht Kopf (The World Stands on its Head) house.

And not only is the house upside-down but so is everything INSIDE the house. If that weren’t Alice-In-Wonderland weird enough, on the grounds of this structure there’s also a miniature castle and an oversized bench. Constructing all this was so disorientating for the workers who built Die Welt Steht Kopf that they could only work in three hour shifts. Their labor allows visitors today to take all sorts of optical illusion photographs (see example below).
Device to Root Out Evil—Vancouver

It is cheating a bit to include The Device to Root Out Evil in this post. (There’s a sentence we never imagined we’d be writing). This “device” isn’t a house so much as a sculpture of an upside-down chapel by American artist Dennis Oppenheim. The piece was originally commissioned by Stanford University, which apparently wan’t very specific in its request to Mr. Oppenheim because it immediately dismissed his work as “too controversial.”

Spot Cool Stuff thinks art, especially on a university campus, is supposed to be controversial. And the sculpture itself is rather amazing—it’s one of the few pieces of architecture that has an ability to transform itself throughout the day depending on the light. (The Taj Mahal is another). In any event, after bwing ostricized from Stanford the Device to Root Out Evil went on a sojourn to the Tate Gallery in London, the Whitney Museum in New York and Olympic Park in Seoul before finding a permanent home along the water in Vancouver.
“House Attack”—Vienna, Austria Viennites (or Viennoids or whatever one calls the residents of Vienna)

must have done a double take after an unusual feature was added atop one of the buildings in the city’s museum district in 2006. As part of an exhibit by artist by Erwin Wurm titled with the practical advice “Keep a Cool Head”, the MUMOK (the Museum of Modern Art, or MUseum MOderner Kunst in German) added what appears to be small family house violently flung upside-down onto a top edge of the building. Sadly, Wurm’s exhibit is now gone but the MUMOK is still a must-visit for Vienna travelers interested in art and/or surrealism. 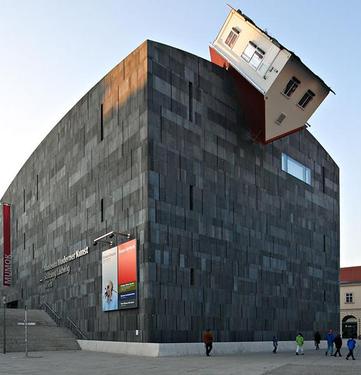 The sun-dreniched Mediterranean island of Majorca is a Mecca for partying beach-going tourists. So what better place for a group of investors to build a Himalayan-themed amusement park?

Visitors to this self-describe “Tibetan-style mansion” are herded from room to room for the ostensible purpose of following the life and times of a completely fictional character who was supposedly “a rugged adventurer on a life-long quest for a legendary red jewel, an ancient monk, a mysterious sherpa and a magnificent mermaid princess.”

The concept of a Tibetan living in a mansion, a mermaid existing in a snowy landlocked region and anyone wanting to leave a real beach to experience an artificial mountaintop is so surreal that we can only imagine that the House of Katmandu designers decided to complete the nonsensical experience by making the exterior of their building appear upside down. 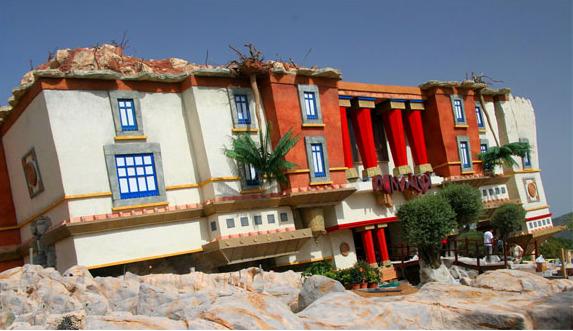 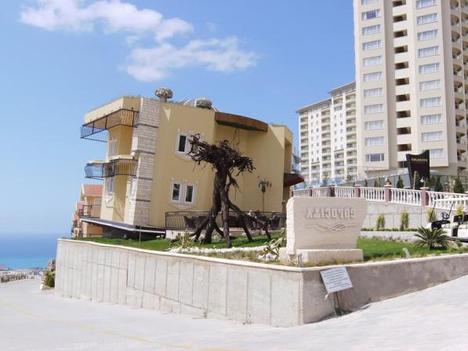 Gravity Is a Force to be Reckoned With by Iñigo Manglano-Ovalle — North Adams, Massachusetts
French artist Jean-François Fourtou loves to play with dimension and proportion. In his recent project ombée du Ciel (Fallen from the Sky), Fourtou plopped an upside down house right in the center of his property in Morocco, disorienting his viewers and creating a bewildering experience of “home.” This upside down house is inspired by his grandparents’ home in France, reproduced to scale. Viewing the house from inside just looks like coming to a magic world and the experience of walking on the ceilings must evoke both a disorienting and funny feeling.

If you are fascinated with upside down architecture, you probably will like another upside down house we featured before by Polish partners Klaudiusz Golos and Sebastion Mikuciuk. 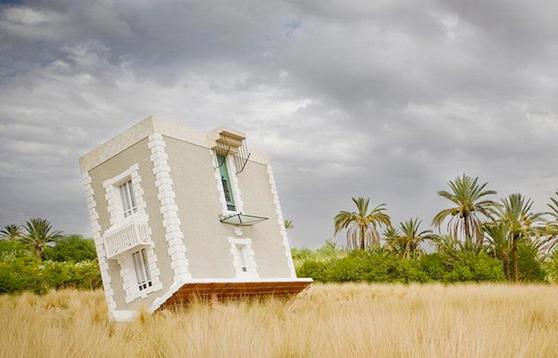