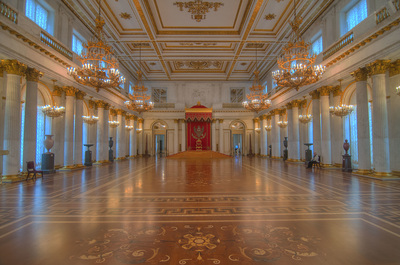 There are the basics that you need to know

One of the largest  and oldest museums in the world
1754-1762: The 16th century architect Rastrelli created the most famous building of imperial St. Petersburg, the Rococo style Hermitage Winter Palace.

With Rococo flourishes usually reserved for furnishings, the noted sixteenth century architect Rastrelli created what is most certainly the most famous building of imperial St. Petersburg: the Hermitage Winter Palace. Built between 1754 and 1762 for Empress Elisabeth (daughter of Peter the Great), the green-and-white palace is a lavish confection of arches, pediments, columns, pilasters, bays, balustrades, and statuary.

Three stories high, the palace has 1,945 windows, 1,057 rooms and 1,987 doors. Not an onion dome is to be found on this strictly European creation.

The Hermitage Winter Palace served as the winter residence for every ruler of Russia since Peter III. Peter's mistress, the Countess Vorontsova, also had rooms in the grand Baroque palace. When his wife Catherine the Great seized the throne, she took possession of her husband's quarters and redecorated.

Nicholas I lived in a comparatively modest apartment in the Palace while his wife Alexandra did further decorating, commissioning the elaborate Malachite Room. Alexandra's exuberant room later became the meeting place for Kerensky's Provisional Government.

In July, 1917, the Provisional Government took up residence in the Hermitage Winter Palace, laying the foundation for the October Revolution. The Bolshevik government eventually transferred its capital to Moscow. Since that time, the Winter Palace has served as the renown Hermitage Museum.