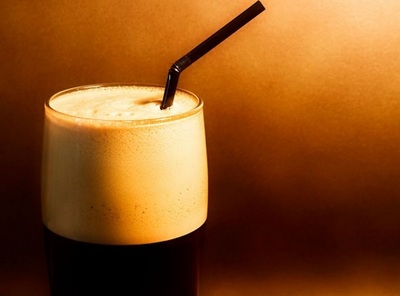 or A Café frappé
Greek frappé (Café frappé) (Greek: φραπές) is a foam-covered iced coffee drink made from spray-dried instant coffee. It is very popular in Greece especially during summer, but has now spread on to other countries. There are numerous ways in which this coffee can be tailored to the individual's taste such as: 1.all water-no milk; 2.half-half; 3.all milk and; 4.varying levels of sweetness. Frappe is also extremely popular in the country of Cyprus where fresh milk is used as opposed to condensed. In French, when describing a drink, the word frappé means shaken and/or chilled; however, in popular Greek culture, the word frappé is predominantly taken to refer to the shaking associated with the preparation of a café frappé. 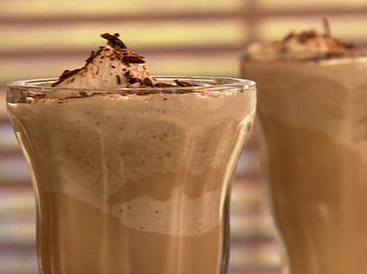 History
Greek frappé was invented in 1957 at the International Trade Fair in Thessaloniki. The representative of the Nestlé company,Giannis Dritsas, was exhibiting a new product for children, a chocolate beverage produced instantly by mixing it with milk and shaking it in a shaker. Dritsas' employee Dimitrios Vakondios was looking for a way to have his usual instant coffee during his break but he could not find any hot water, so he mixed the coffee with cold water and ice cubes in a shaker. This improvised experiment established this popular Greek beverage. Frappé has been marketed chiefly by Nestlé and is among the most popular drinks in Greece and is available at virtually all Greek cafés.

Preparation
The coffee can be made either with a cocktail shaker or an appropriate mixer (e.g. a hand mixer). One or two teaspoons of instant coffee, sugar (to taste) and a little water are blended to form a foam, which is poured into a tall glass. To this is added cold water and ice cubes, and, optionally, milk - typically evaporated milk. The glass is served with a drinking straw.

Frothy top
The spray-dried instant coffee contains nearly no oil, just tiny particles (coffee solids), some molecules responsible for flavor and taste, and caffeine. When dissolved, spray-dried coffee forms a simpler and more stable colloid relative to traditionally brewed coffee. This enables creation of the characteristic thick frothy layer at the top of the coffee. This layer appears similar to crema, the foam found in espresso, but is much thicker and the composition is different. It can be characterized mainly as a three phase colloid where tiny bubbles are held together by the coffee solids. 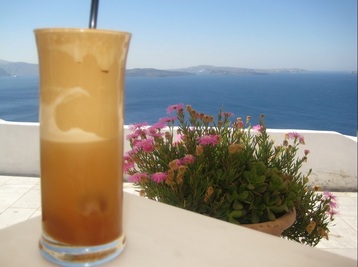 The absence of oil (or the significantly lower oil content compared to traditionally brewed coffee) makes the system more stable and the bubbles do not collapse with the same ease as in crema. Soon after the foam is created, a process of thickening takes place where water molecules are constantly pushed out of the frothy mixture. The water is pushed out due to drainage occurring due to pressure differentials along the foam septum. Higher viscosity will retard the phenomenon, and that is the reason that the addition of sugar will create a better foam. The phenomenon continues until bubbles come very close together and the foam almost solidifies. This process can take between 2 minutes to 10 minutes and depends strongly on the agitation process during mixing. As the bubbles come closer together they will slowly start to coalesce and create bigger bubbles. According to the Laplace equation, variation in bubble size will result in faster collapsing of the bubbles since the bigger bubbles will consume the smaller ones. Hand-mixers create smaller and more uniformly sized bubbles. The smaller bubble size reduces the bubble pressure gradient and forms a much longer lasting foam.

The presence of oil (a hydrophobic agent) can significantly accelerate the collapsing process localized reduction in the foam elasticity, resulting in the creation of a lighter foam with average bubble diameter larger than 4 mm. This is the reason it is not possible to make a good frappé in many countries, unless one can find spray-dried coffee (which is actually generally less expensive than freeze-dried instant coffee). The utilization of a hand mixer makes possible the creation of finer bubbles which increases the time that the foam can last. The best frappé coffees are often held to be those with the smallest bubbles and a thickness of about 1.5 inches to 2 inches (30 mm to 50 mm) of foam.

Kahlúa, Baileys Irish Cream or other liqueurs are sometimes used for additional variation. Some restaurants have the option of adding a ball of vanilla ice-cream into their frappe instead of milk. Though not technically "frappé" (since they are not shaken), some variations are stirred with a spoon, when a shaker is not available, creating a slightly different texture and taste. In this case they may be called in slang κουταλάτος (koutalatos,  "spoon-made") or καραβίσιος (karavisios,  "of the ship") as this kind was usually made by Greek sailors while at sea.
Frappé outside Greece
Although a Café Frappé today mostly is associated with the Greek instant coffee version, the rest of the world have during the last two decades embraced the espresso version, simply shaking a double espresso with 1/2 teaspoon white sugar (shaker 2/3 full of ice) and poured directly into a glass.

Greek Frappé is also consumed in Cyprus, where the Greek Cypriots adopted the frappé into their culture, in Albania, the Republic of Macedonia, Thailand, Malaysia,Indonesia, parts of Turkey, Ukraine, Poland and Romania. In recent years foreign tourists in Greece have taken frappé to their homelands, where it has been adopted with some differences. In Bulgaria, Coca-cola is sometimes used instead of water (possibly the inspiration for Coca-Cola Blāk), in Denmark, cold milk is often used instead of tap water. In Serbia, frappé (usually called hladan nes, "cold instant coffee") is usually made with milk or ice-cream, and whipped cream is often added on top.

Frappuccino and variants
In the United States, "frappe" has two meanings, only one related to coffee, and neither connected to the Greek coffee drink. In the northeastern region of New England, a frappe (pronounced "frap" and spelled without the accent) is a thick milkshake. A coffee shop there, in Boston, Massachusetts, combined a milk shake with coffee and called it "frappuccino".When Starbucks bought the shop, the Coffee Connection, it bought the trademarked name. The Starbucks in Greece offers both Frappuccino and Greek-style "Frappe" (written by Starbucks without the accent). Since then frappe has entered the American lexicon as an iced coffee drink, either sold chilled or frozen. Many of Starbucks' competitors, in the United States, in the Philippines and elsewhere, have begun offering drinks similar to the popular and trademarked frappuccino and called them "frappe" with or without the accent, some which do not include any coffee.