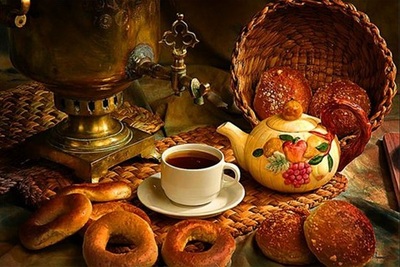 Hallo there ladies and gents and individuals of less certain persuasions, we have a very special little book here. Ok I lied. It's a giant tome of a book that's big enough to be involved as a prop for a wizard's book. But have no fear! It's got pictures! This is the kind of book that adults use when they feel like looking educated but don't actually want to read. There's lots of little writing, but you probably won't pay much attention to it.

Supposing you were to actually read it though you'll find yourself in for a wonderful treat, assuming you live in Australia and Melbourne and enjoy coffee. Which, when you think about it, is about 0.06% of the human population. So I guess they probably picked the wrong target market huh?

But let's say hypothically you are actually one of the 4 million snowflakes who'd want to look at this book, you'll find it full of carefully crafted details and a wonderful penchant for storytelling that will lead you on a journey and enlighten you on all the little details that make up the making of coffee. So basically you'll go OCD over coffee and potentially become the annoying hipster ordering the ridiculously complicated coffee with that specific bean from that specific place.

But don't worry! The book also tells you where you can go annoy the barrista's for the best coffee in Melbourne.

So enjoy and have a wonderful time feeling jittery.

Samovar is a pure Russian find for tea. Tea was firstly presented to a Russian tzar by Mongolian khans and later the samovar's "grandfather" came to Russia from Persia.

In old Russia tea quickly replaced favorite Russian drink - sbiten (mix of hot water, honey and herbs) and became a way of life. Tea was drunk all day long - you could find hot tea sellers on street corners, in trains, in offices, not talking about bars and restaurants.

The best way to serve tea was a samovar which was considered a staple in every home. The steaming samovar embodied (and still does!) by its smooth silver surface home comfort and Russian hospitality.

Samovars were made from nickel, copper, pinchbeck, in special cases - from silver. Skilled masters wanted to astonish customers and made samovars as a real art of work. Samovars were plated with gold, or silver and came in various shapes ("vase", "pear", cubic, many-sided) and sizes depending on their use. Most samovars were small for homes.

The first samovar was made in Tula. Later samovar manufactures were in the Urals, Moscow, Saint Petersburg, and Tula, in Vladimirskaya, Yaroslavskaya and Vyatskaya provinces. But Tula became known as the center of Russian samovar and there were about 40 samovar factories there by 1900. Tula samovars gained first prizes at the exhibitions not only in Russia, but abroad.

In fact, the samovar is an urn in which water is kept boiling for a long time, since charcoal or wood is burned in a vertical pipe through the center that heats water. On the top of the samovar a small teapot was held that provided a strong tea brewing. This tea is usually diluted with hot water from the samovar.

Nowadays Russians still serve tea with samovars quite often, electric ones though. Samovars can be easily found in kitchens, offices, and even cafes. The warmth of Russian samovar tea drinling will melt your heart with fluxing comfort and delight. 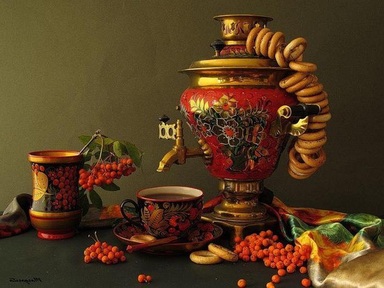 If you ask any habitant of Russia what he drinks most often, the only possible answer will be "tea". In fact, tea has become real national Russian beverage for last two centuries. But at the beginning tea wasn't popular at all and was very expensive. So it was drank only on big events. In general, Moscow nobility bought tea as medicine, because this herb stimulated blood system and "deterred from a wish to sleep" during long services in church. Another reason of low popularity of tea was very simple, people didn't know how to make tea. There are a lot of funny stories about tea, for example, one servant made tea to his master with onion, pepper and parsley. The master was mad about this, but poor servant couldn't understand the reason and after long brooding he realised that he had forgotten to salt tea ;-) There were cases, when people served boiled tea leaves with vegetable oil. Tea became, indeed, the beverage of the folk in 19 century, when it was served in all cafes, bars and restaurants. Tea is always served in couple, little teapot with brewing and samovar with boiling water, that was a pure Russian invention. Sugar was very expensive, that's why they drank unsweetened tea while holding a piece of loaf sugar in the mouth. True professionals could drink 6-7 cups of tea with one piece of sugar! Some people liked and still like "to white" tea with cream or milk. Pure tea can be accompanied with lemon slices or various jams. The taste and the smell of tea depends on the way of its making. Russians usually make tea in this way: Rinse a clean teapot with boiling water and let dry a little. Put tea in, on the basis of 1 ts is for 1 cup. Pour boiling water over, cover with towel and let brew for 5 minutes. Pour tea in cups and dilute with water. And at the end, I want caution you, you can make tea in different ways, but the principal thing is its freshness. There is an Eastern proverb: "Fresh tea is like balsam, and tea, left for a night, is like snake's poison." 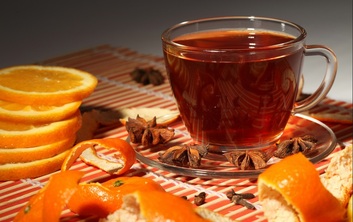 A green eye (also known as "Triple Death") is drip brewed dark-roast coffee with a triple shot of espresso. 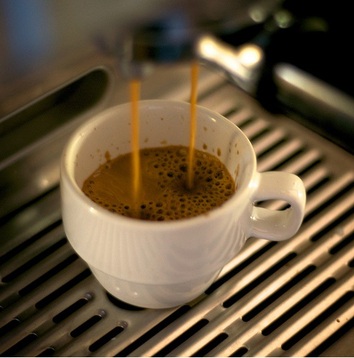 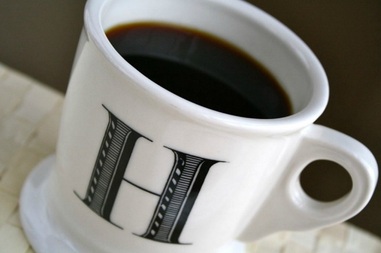