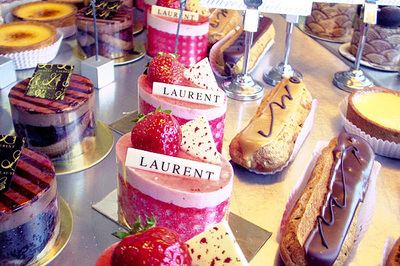 
two birthday boys: Yoshi Lis and Tosha at Brunetti Born one day apart they look cute-alike, but one is enjoying himself with coffee and chocolate eclair and the other is saying: "one thing I do not understand - why You can invite your friends over for a birthday party and I can't???"
I WAS MADE IN ITALY... NEW

... well, almost... Maltese... well, almost,,, my mum was a toy poodle by birth..." Tosha's day out for coffee and introducing himself to locals... and us breakfasting...

— with Yoshi Lis and Ned Vorkapic atSezanas Cafe.
BULLET PROOF COFFEE NEW
There are more coffee varieties for us to explore

Melbourne must be a cappuchino and latte capital of the world with all the choices we have and how we get spoiled here... but today can I have a cup of...

Caffè macchiato (Italian pronunciation:, sometimes called espresso macchiato, is an espressocoffee drink with a small amount of milk added, today usually foamed milk. In Italian, macchiato means 'stained' or 'spotted' so the literal translation of caffè macchiato is 'stained coffee', or coffee with a spot of milk.

History.
Traditionally caffè macchiato is made with one shot of espresso, and the small amount of added milk was the 'stain'. However, later the 'stain' or 'spot' came to refer to the foamed milk that was put on top to indicate the beverage had milk in it. In fact, a caffè macchiato in Portuguese is named café pingado which means coffee with a drop, referring to the drop of milk.

The reason this coffee drink got its name was that the baristas needed to show the serving waiters the difference between an espresso and an espresso with a tiny bit of milk in it; the latter was 'marked'. As the term 'macchiato' to describe this type of coffee predates the common usage of foam in coffee by centuries, the staining 'agent', the additive that lightens the dark espresso, is traditionally the milk, not the foam.

Trends
The Macchiato can be prepared either with steamed hot milk or cold milk. If hot, the espresso's name would become macchiato caldo (marked hot); if cold, macchiato freddo (marked cold). The choice between 'caldo' and 'freddo' is usually a matter of personal tastes. Some newer cafes tend to add steamed milk to the espresso in a 1:1 ratio (or more), as well as mixing the milk into the espresso, making it more like a miniature caffè latte or cortado. Some people call this piccolo latte, particularly in Australia.

The other variant of the term, latte macchiato, conversely means 'milk with a spot of espresso', and indicates milk with just a little espresso in it (much more milk than in a caffè latte). However, in certain preparations (which differ from place to place), latte macchiato has not much difference in milk-to-espresso ratio when compared to the caffè latte; caffè lattes are normally around one-eighth espresso to seven-eighths steamed milk.
UBIQUITOUS VBT
THE PERFECTION IN THE DESIGN VODKA< BORSCH AND TEARS