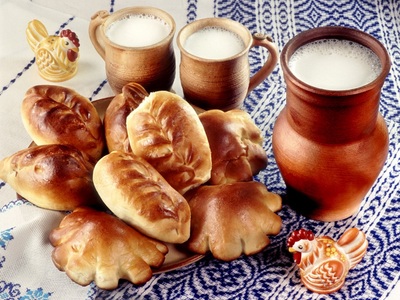 one of our favourite places in Melbourne - the food is fresh, the service is immaculate, the water is filtered, the salads are yummy, the atmosphere is uplifting with good positive energy flowing through this place... the coffees are top class and add to this - great company - you have the perfect place for lunch or light dinning! plus $$ savings with Ent Book voucher!
Entertainment Book Melbourne special - lunch with Ashish Hussain and Yoshi Lis at Nikos Quality Cakes Oakleigh
WILLIAMSTOWN MUSSELS - ENTERTAINMENT BOOK SPECIAL NEW

very fresh and refreshing food, also it is a self serve - so you can put anything you want inside your pita pocket..
full chicken pocket X 2 for $10.95 (and $10 savings with Entertainment Book) - yuuuummmm...

our lunch was Original Burger and Chicken Burger. Total Bill for two: $7.95 (savings with Entertainment Book: $7.95)
ONE IN THE POWER OF FOUR NEW

Russian cuisine has developed over a long period, adopting different dishes from many different countries, but at the same time it has retained many of its own traditions. In spite of all of the changes in the national cuisine over the years, no one can imagine Russian food without brown bread, soup, pancakes, pies and porridges or dishes made with fish or mushrooms or pickled vegetables.

Sedentary lifestyle of Russians is considered to be one of the factors which influenced the development of Russian cuisine. During long winters, when people spent most of their free time inside of the house, they cooked using the Russian oven. Russian stove allowed the cooks to either bake or boil food; however, it was impossible to fry, grill or roast meat. Russian stove uses a very interesting temperature regime: food could be prepared at either a constant or decreasing temperature but never with an increasing one. These conditions allowed to cook specific meals which cannot be created today using a modern gas or electric oven.

Russia's expansions of territory and openness of the country towards the world in the 16th-18th Centuries led to appearance of new types of food, such as smoked meat and fish, chocolate, ice cream, wines, and liquor. At least for the urban aristocracy and provincial gentry, this opened the doors for the creative integration of these new foodstuffs with traditional Russian dishes.

New territories which were added to the Russian Empire also influenced the cuisine and introduced their national meals to the whole country. For example after the Caucasus area became a part of Russia people got acquainted with today's very popular dish - shashlyk (shish-kebab).

When in Russia you should certainly try Russian soups.

One of the most popular soups in Russia is borsch (beetroot soup), though Ukrainians claim that they invented this hot meal. Borsch is made on the basis of meat or chicken broth and includes beetroot as the main ingredient, which at the same time gives a strong red colour to the soup, as well as other vegetables. This type of soup can be served either hot or cold.

Shchi (cabbage soup) is also popular in Russia. It is generally made of either cabbage or sauerkraut although meat can be added. Shchi made of sauerkraut have sour taste and are called sour shchi. A summer sorrel soup, popular in pre-Revolutionary Russia, was known as green shchi. This kind of soup is usually served with sour cream.

Solyanka is also a well-known Russian soup. It is is a thick, spicy and sour soup. There are mainly three different kinds of solyanka, with the main ingredient being either meat, fish or mushrooms. All three types contain pickled cucumbers with brine, cabbage, salty mushrooms, cream and dill. The soup is prepared by cooking the cucumbers with brine before adding the other ingredients of the broth.

Ukha is loved by fishermen. Some people claim that the real ukha can be made only on fire using fish, which have just been caught. Though there are plenty of nice recipes how to cook ukha at home. The main ingredient is, of course, fish including vegetables, and the most important thing to remember is that the fish soup becomes ukha if you add a spoon of vodka into it.

This is a real Russian cold soup, which is very popular. It is made of vegetables, potatoes, sometimes meat and eggs, including kvass. Kvass is a Russian non-alcoholic drink made of bread. You pour kvass into the mixture of vegetables in your plate and your soup is ready. The soup is served with sour cream.

Russian hot dish called "pelmeni" (dumplings) is very popular in Russia. They are made of minced meat filling, wrapped in thin dough (made out of flour and eggs, sometimes with milk or water added). Pork, lamb, beef, or any other kind of meat can be used; mixing several kinds of meat is quite popular. Traditional Ural recipe requires the filling be made with 45% of beef, 35% of lamb, and 20% of pork. Often various spices, such as pepper, onions, and garlic, are mixed into the filling. They are easy to cook and very tasty with different dressings. One can buy semi-manufactured dumplings at any supermarket.

"Blinis" are thin pancakes. Russian blinis can be made from wheat, buckwheat, or other grains, although wheat blinis are most popular in Russia. You may eat them with jam, sour cream, meat, salted fish and caviar. Nowadays there are special cafes which make only pancakes for their guests and may offer interesting dishes made of pancakes to you. 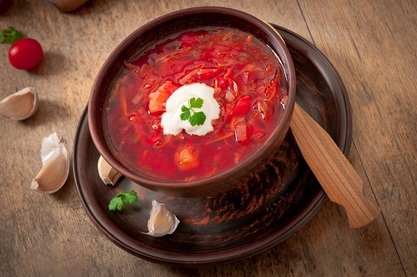 Shahslyk is a form of shish kebab usually cooked at picnic parties (marinated meat grilled on a skewer). Originally it was borrowed from the peoples of the Caucasus and today in summer cafes or restaurants in Russia they offer different types of shashlik including lamb, pork, chicken and even salmon shish-kebab.

Salads are widely spread in Russia, especially salads with mayonnaise. The most famous is Olivier salad (sometimes called Russian salad). Usually it includes meat, potatoes, eggs, pickled cucumbers, green peas and mayonnaise. During big holidays or family celebrations people make a lot of salads and appetizers. One of the most popular appetizer is Seledka (herring with onions). It is usually served as an entre with vodka.

There are some dishes and products which are traditionally associated with Russia. First of all caviar, which is considered to be a Russian delicacy. One can find two types of caviar, red and black. Such fish species as salmon and trout are caught or raised to get red caviar. It is cheaper than the black one, while the black caviar has always been a symbol of luxury. By taste and nutrition value, the three types of fish are considered to be the most valuable, they are white sturgeon, stellate sturgeon and sturgeon.

Nowadays small food kiosks which sell snacks are widely spread in big Russian cities. They offer sandwiches, salads and drinks. In small cities and villages and also during train stops at small stations one can observe local people selling handmade pies (pirozhki) with different fillings as well as smoked fish and ice-cream. Beer and non-alcoholic drinks can be sometimes purchased in the street as well. In late summer berries and mushrooms are sold along the highways. 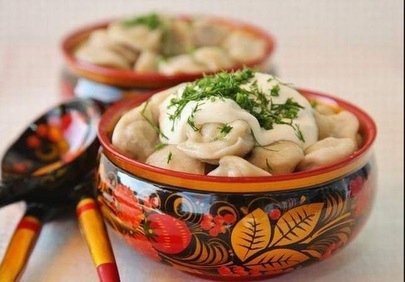 I love my Entertainment Book Melbourne -
lunch with Mr Kapuska aka Ned Vorkapic - only $6.75 each - Hong Kong style BBQ
($6.75 savings with Entertainment book)
HOW TO MAKE HOME MADE BAGELS NEW
YOUNG AND GREEN NEW

Jack Daniel's grilled chicken with mash and veggies ($30.95 for two - total saving with Entertainment book is $30.95)
I continue publishing my childhood recipes...
This is a dish rarely cooked by my mom but it was a real treat always when she made it. I remembered it when my friend, Rachel mentioned that she cooked it before coming to our September event...

Do:
Saute bacon bits until almost crispy. Add olive oil and onions and cook for about 5 minutes until onions are lightly golden. Add sauerkraut to the bacon and onion mixture. Add the carrots. Add chicken broth, sugar and seasonings. Stir to mix thoroughly. Cook, uncovered, stirring frequently, until everything is heated thoroughly. Transfer to a roasting pan. Cover and bake in 300 degree Fahrenheit oven for 30 minutes up to 1 hour until kapusta is browned slightly. Stir occasionally and add water or chicken broth if necessary (push kapusta aside and check bottom of roasting pan for liquid). 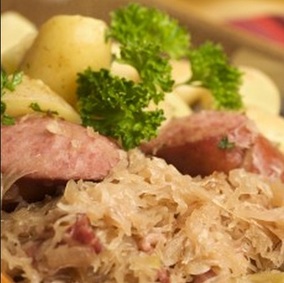 Do:
Place peeled potatoes in a saucepan with water to cover and bring to a boil. Cover, reduce heat and boil gently for 30 minutes, until the potatoes are ready. Drain,and press through a food mill into a bowl. Add whole eggs and mix well with a whisk. Mix in the milk, salt. In a skillet, heat oil. When hot, add about 1/4 cup of crepe mixture, which should spread to create small circles. Cover over medium heat for 2 minutes on each side. Transfer to a cookie sheet and keep in a warm oven until you make the remainder of the crepes. To serve, spread the entire top surface of the warm crepres with red caviar. Mound 2 tbsps sour cream in the centre and sprinkle with chives. Serve immediately. 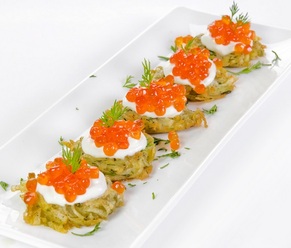 Do:
Soak mushrooms in cold water for 2-3 hours. Boil in the same water. Make noodles dough from water and flour, cover with towel for 15-20 minutes. Roll out the dough thinly and dry a little, after that cut into noodles. Chop carrot into thin strips, cube potatoes and boil in a lightly salted water. Pour in mushroom water. Boil noodles separately and put in mushroom soup. Chop onion and mushrooms into strips. Fry separately in oil. Put in the soup, bring to boil and salt to taste. Serve it hot with chopped parsley.

we ordered grilled chicken breast, mash and vegetables. really liked the gentle and attentive service by the member staff - Rachel. Hope she will get some bonuses for Christmas - very nice and professional girl! Our two meals costed $31 for two (total saving with my dear Entertainment Book: $31)
LATE BREAKFAST
pita, eggs, salami, green capsicum, cherry tomatoes and spring onions:
SOME FIND THEM TWISTED

Need
2.5 cups of almond meal
8 XL eggs
8 table spoons of fresh milk
1 tea spoon of baking soda (plus one table spoon of lemon juice - mix with soda before adding it to almond meal)
a pinch of no-salt-salt
a table spoon of raw brown sugar
1/2 white onion
a pinch of fresh oregano and fresh parsley
a pinch of fennel seeds (to top the bread)
Do
mix all the ingredients together and place into the oven for 55min + possibly 20min on 180C
ENTERTAINMENT BOOK - MR BIANCO

Rebecca Rumble from Entertainment Book Melbourne is inviting everyone to this event - this is a copy of Rebecca's email I just got in my inbox :
"Hi Natasha,
We have a “mEat your Sausage maker” event at Mister Biancohttp://www.misterbianco.com.au/
next Wednesday night in Kew – it’s a two course dinner with a sausage making demonstration, free flowing Dal Zotto wines, and a sausage making goodie bag to take home. It’s normally $95 but for Entertainment Members it’s only $80.

It looks like it’s going to be great fun, I’m going to be there (not that that makes it more fun) but there are still about 20 spots to fill that..