bohemian rhapsody social club
An Evening with
DAVID SCHEEL
David Scheel is a true South Australian success story. Born at Stirling in the Adelaide Hills he studied at the University of Adelaide, gaining an Honours degree in languages and a concert diploma on the piano. However, coming from a theatrical family theatre was David�s first love, and after a short stint on stage, in films and on television he decided - like so many before him - to try his luck in England. The gamble was so successful that it was to keep David away from Australian shores for the best part of 18 years.
In the UK David�s work ranged across a broad spectrum, from pantomimes with the likes of Norman Wisdom, to work with the National Theatre, TV series such as Bergerac, plus many TV and radio appearances, principally for the BBC. However, it was when David went solo, combining comedy with classical music, that his career really took off. His best-known show, Don�t Shoot Me, I�m Only the Piano Player, sold out in London�s West End, at 3 consecutive Edinburgh Festivals, picking up a Variety Club of Great Britain award along the way. West End offers soon followed, plus many more appearances on top-rating BBC series, including Stop the Week and The Garden Party, on both of which David was a regular weekly guest.
Since returning to Australia in 1994 David has expanded his international touring schedule into the USA and Canada, and in October 2002 undertook his first tour of South East Asia, breaking box office records throughout the region. He has also devised two new programs, Maestro, A Celebration of Musical Eccentrics, and his latest offering, AShorte Hysterical Historie of Musicke, which he describes as �the most satisfying program I�ve ever written. I think it�s just as funny as Don�t Shoot Me... and the music content is, if anything, better.� An assessment agreed upon by critics when the new show opened at Arizona State University in late 2001. A Shorte H H... was also filmed and broadcast on US television in August 2002.
Away from mixing classical music and comedy, David is also an award-winning serious composer, and a highly respected writer on conservation issues. Since 1993 he has been happily married to his Romanian wife, Tatiana, a passionate devotee of philosophy, ancient history and classic music, and "the perfect partner". David and Tatiana live in the world heritage listed Blue Mountains National Park in New South Wales.
BREAKING NEWS

** Recent times have been a roller coaster ride for David. His wife, Tatiana, was diagnosed with breast cancer in 2013. Fortunately it was detected extremely early and she is well on the way to making a full recovery. Then David himself had an unexpected (and surprisingly painful) operation, followed almost immediately by a near-fatal car accident (the other driver was totally at fault!) In between all this, an extremely successful first tour of South Africa (he returns in 2015), the prematurely early death of his North American manager, Arthur Shafman (please see contacts for David�s new North American representation), an invitation to perform before royalty, and most recently (October 2014) a welcome return to London�s West End after an absence of 20 years.
____________________________

** In July 2013 David made his first-ever tour of South Africa. Despite being a totally unknown quantity in that country, the theatres were sold out from Day One, every concert was greeted with a standing ovation, and the press gave him rave reviews in Johannesburg and other major centres. For obvious reasons, David is already planning a return visit!
ELENA TRETIAKOVA MONT PLAISIR MILLINERY
Elena loved art and craft from her early childhood years. She started learning complex millinery art in Australia while she worked in the millinery industry. Elena took lessons from one of the most praised milliners in Melbourne and soon, after about a year she felt confident enough to open her own business. This was more an exciting hobby for Elena. She like wearing hats and creating something that you love gives a great pleasure. I started by business La Elegante in 2003, the brand is called Mont Plaisir which is seen on each hat label.
YULIA KOLOSOVA DESIGNS

Yulia Kolosova is a fashion designer, She is a member of Association of Designers of Russia (ICSID). Yulia has 12 years experience working as a professional designer in St Petersburg. Her main area of expertise is contemporary casual fashion garments for women including two types of accessories: silk flowers for special occasions and leather flowers that suit any occasion. Yulia uses her own design of prints and hand made buttons. She also creates performance costumes and uniforms.
BELLA-NATALIA LUKIANOVA BOOK "BRIDE FROM MOSCOW"
WEBSITE
​About the Author

Natasha Lukin (Bella Natalie Lukinova) draws on her many and varied experiences as a Russian and Australian. With her background in Science and Journalism, she worked as a reporter and scriptwriter for news and current affairs on Moscow television, including the popular in late 80s – early 90s program Good evening, Moscow!
She also was a freelance journalist for various Soviet newspapers and magazine, and authored several non-fiction books, all in Russian language.
Natasha migrated to Australia in 1992, shortly after the August coup, when there was much disillusionment with Perestroika.
She started her new life with teaching Russian at the University of Melbourne and got accredited by NAATI as interpreter/ translator.  She worked for the next ten years as a Health educator for the Cancer Council of Victoria. Currently she lives in Canberra, being self-employed in the familiar field of health, fitness and lifestyle.
ABOUT THE BOOK

Reptile smugglers, Siberian diamonds, Russian lovers, a missing husband,
Chernobyl, an abusive stepson, stoned bodies …
Svetlana Goranski found herself in the middle of it all.
She is a modern, archetypal Russian woman, outwardly sentimental and passionate and filled with the qualities that go to make up the Russian soul.
She came to Australia by chance hoping to realise her dream of a happy family life. But to reach that goal she must overcome the fear which so many Russians have within them as well as outwit racketeers, clear her own name and work out the mystery of her Australian husband’s disappearance.
Set against the backdrop of the collapse of the Soviet Empire this is both a love and an adventure story in which the beautiful Svetlana draws on her inherent honesty and loyalty to her new country. 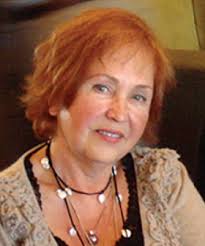 Our jewellery is pure

Gold Plating - All of our gold finish is electrolytic plating with a minimum plating thickness of 40 to 120 millionths of an inch (1.0 to 3.0 microns).

What a striking combination satin acrylic and blazing Swarovski crystals create in this futuristic jewellery! It's the perfect accessory for any outfit! You gotta love it!

The world is your oyster when you wear this gorgeous treasure! A fancy curb link chain, fluid and open in design, supports a double strand of flawless Fifth Avenue Collection white pearls. Rhodium finished bands reflect pools of light with precise rows of Swarovski crystals, separating the varying sizes of pearl. With authentic weight and luster, this priceless neckpiece makes exquisite taste accessible without compromising quality. A two-inch extension rounds out this piece, making it a perfect find for women who want only the best in refined elegance.

Rhodium - our rhodium electroplate is a hard durable metal and is considered by many as the brightest "white" metal of the entire platinum metals family. It has exceptional resistance to oxidation. At time of writing, rhodium cost more than four times as much as platinum and more than 400 times as much as silver.

Swarovski Crystal - At Fifth Avenue Collection we use Swarovski crystal from Austria. It is considered to be the world’s finest crystal, renowned for its quality and beauty. Our jewellery boasts many colors, cuts and designs of Swarovski crystal.