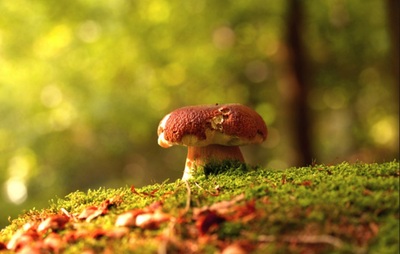 22/08/14 articles prepared by Natasha M
I published lots of interesting material before on mushrooms - the magical and most mysterious food...

Could Mushrooms Aid in the Treatment of Cancer?
by Dr Mercola
source

Mushrooms are neither plant nor animal. They're fungi and have been valued for their medicinal properties for centuries.

In ancient Egypt, mushrooms were thought to bring long life, and today in the 21st century, research is bearing out the mechanisms behind mushrooms' health-boosting properties, including their potential to fight one of the greatest plagues to modern man – cancer.

The Cancer-Fighting Properties of MushroomsAbout 100 species are being studied for their health-promoting benefits, and about a half dozen really stand out for their ability to deliver a tremendous boost to your immune system. In fact, some of the most potent immunosupportive agents come from mushrooms, and this is one reason why they're so beneficial for both preventing and treating cancer.

Long-chain polysaccharides, particularly alpha- and beta-glucan molecules, are primarily responsible for the mushrooms' beneficial effect on your immune system. In one study, adding one or two servings of dried shiitake mushrooms was found to have a beneficial, modulating effect on immune system function

Other naturally-occurring compounds in mushrooms such as fungal proteins, lectins, peptides, laccases, and others have also been reported to have significant effects on immune function. A protein-bound polysaccharide extract from turkey tail mushrooms is also being used to boost cancer patients' immune function in countries including Japan

An extract from maitake mushrooms has also been shown to stimulate the immune system in breast cancer patients. However, much research also shows that mushrooms have direct anti-cancer effects as well. For instance: 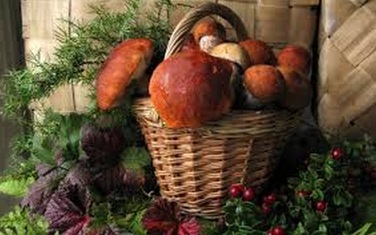 One particularly unique mushroom, Cordyceps, also called caterpillar fungus or Tochukasu, has anti-tumor properties as well. This parasitic mushroom is unique because, in the wild, it grows out of an insect host instead of a plant host. It has long been used within both traditional Chinese and Tibetan medicine. Scientists at The University of Nottingham have been studying cordycepin, one of the active medicinal compounds found in these fungi, as a potential cancer drug.

What Else Are Mushrooms Good For?Mushrooms are not only capable of bolstering immune function and potentially fighting cancer. Aside from being rich in protein, fiber, vitamin C, B vitamins, calcium, and minerals, mushrooms are excellent sources of antioxidants.

They contain polyphenols and selenium, which are common in the plant world, as well as antioxidants that are unique to mushrooms. One such antioxidant is ergothioneine, which scientists are now beginning to recognize as a "master antioxidant."

A previous study in the journal Nature discusses the importance of ergothioneine, which is fairly exclusive to mushrooms (ergothioneine is produced only by fungi and certain soil-inhabiting mycobacteria… plants may contain ergothioneine but only by an association of their roots with a fungus), describing it as "an unusual sulfur-containing derivative of the amino acid, histidine," which appears to have a very specific role in protecting your DNA from oxidative damage. 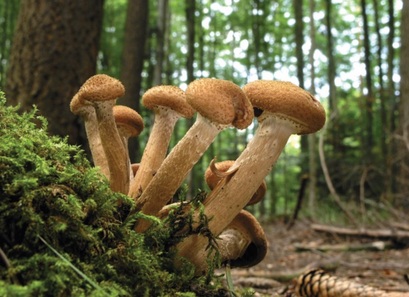 With that in mind, it becomes easy to see how mushrooms may be an important part of an optimal diet. If you don't like to eat them whole, you can also find them in supplement form, either as an extract or whole food supplement. The FASEB Journal also published nine studies on mushrooms that detailed a wide variety of health benefits, including:

In 2011, I interviewed Steve Farrar, who worked and studied mushrooms professionally for the last 30 years. The first 20 years, he spent growing them and working primarily with gourmet chefs, but in the past decade, he's started applying his expertise of mushrooms to health purposes. According to Farrar, Americans consume about 900 million pounds of mushrooms a year, but 95 percent of that is just one species: the common button mushroom and its relatives, the Crimini and the Portabello mushrooms.

Granted, the button mushroom is an excellent food, but there are many other types of mushrooms worthy of consideration if you want to improve your diet and health. Farrar's focus has been on growing various gourmet mushroom species, particularly the wood-decaying mushroom species, which differ greatly from your average button mushroom in terms of biology, nutrition, and medicinal value. To learn more, watch the interview below.

The Mysterious MyceliumMushrooms are nature's recycling system. If it weren't for mushrooms, we wouldn't have plants, because mushrooms (and their "parent" mycelium) break down rocks and organic matter, turning them into soil that provides the framework to nourish plants. Mushrooms are actually only the fruiting body of a more vast fungal form—the mycelium.

The mycelium is a fascinating cobweb-like mat that infuses nearly all landscapes. It is through the mycelium that the fungus absorbs nutrients from the environment. When two compatible mycelia combine, the resulting mycelium occasionally forms fruiting bodies called mushrooms. The mushrooms make spores, which fly away to make new mycelial colonies, and the lifecycle is complete.

Mycelial mats can be too small to see or cover vast areas of ground. Their extreme tenacity makes the soil spongy and able to support 30,000 times its weight. A single cubic inch of soil can contain eight miles of mycelium cells. The largest living organism on Earth is a mycelium in Eastern Oregon that covers 2,200 acres, is ONE cell wall thick and 2,000 years old. Paul Stamets, world-renown mycologist, believes fungal mycelia and the intricate, branching network they form function as "the Earth's Internet," a complex communication highway that is sort of Mother Nature's neural net.

In some ways, mycelia are "sentient" and seem to demonstrate learning. If one pathway is broken, it develops an alternate path. According to Stamets, when you step on it, it knows you're there and "leaps up" in the aftermath of your footstep, trying to grab debris. The mycelia—not JUST the mushrooms—contain many of the healing agents for which mushrooms are revered. Some supplements offer the added boon of including the mycelia of the mushroom for its added health benefits, including potentially enhancing energy production and focus.

Some mycelial products produced by a process known as "Solid State Fermentation" also contain extracellular (ie. secreted through the cell wall and into the surrounding environment) protective compounds that the mycelia produces to protect itself from competitors and pathogens. They may also contain a cocktail of extracellular digestive enzymes that the mushroom produces to digest and liquefy its substrate in order to absorb the liquefied nutrients across the cell wall. 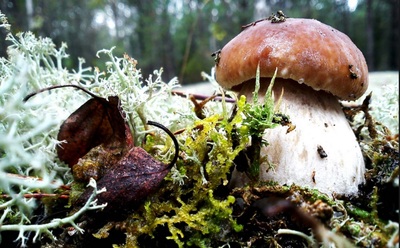 How to Get More Mushroom Power in Your DietFirst off, I highly recommend adding a variety of mushrooms to your diet. They're an excellent addition to any salad and go great with all kinds of meat and fish. As a caveat, do make sure they're organically grown in order to avoid harmful contaminants that mushrooms absorb and concentrate from soil, air and water.  Also, avoid picking mushrooms in the wild unless you areabsolutely sure you know what you're picking. There are a number of toxic mushrooms (all mushrooms are edible, but some of them just once—a mushroom joke), and it's easy to get them confused unless you have a lot of experience and know what to look for. Growing your own is an excellent option and a far safer alternative to picking wild mushrooms.

In general mushroom fruit bodies, especially the button mushroom, are better to eat cooked. There were some studies in the '80s that reported Agaritine, a hydrazine compound found in Agaricus mushroom species, is a carcinogen.  Agaritine is mostly broken down by the heat of cooking. The studies were later mostly discredited.

Later studies done on the Agaritine in Agaricus blazei (a medicinal mushroom that is a tropical relative of the common button mushroom), found that extracted agaritine had antitumorial effects and induced apoptosis in leukemic cell lines. Additionally, cooking breaks down the chitin in the cell wall of mushrooms and makes the nutrients and bioactive compounds more bioavailable. (Note: mushroom mycelium tissue, especially when finely milled, is more digestible than the above-ground mushroom fruit body tissue.) Also for mushroom species such as button mushrooms, which are grown on a pasteurized, manure-based compost (versus a sterilized wood or grain-based substrate), there are some hygiene issues to consider when consuming raw.

Dehydrated, finely milled mushroom powders (especially the milder-tasting mycelial powders) are excellent as "smoothie boosters." A teaspoon or two added to a veggie or fruit smoothie or protein shake is an easy and convenient way to add functionality to what is now a daily habit for many people. Dehydrated mushroom powders require no refrigeration and have a long shelf life, making it easy to maintain a daily mushroom regimen even when traveling. When it comes to mushroom supplements, there are two primary types: 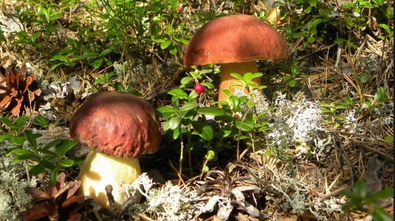 As mentioned earlier, if you choose to eat your mushrooms raw, make sure they are organically grown, as their flesh easily absorbs air and soil contaminants. Likewise, you'll want to make sure any product you buy is certified organic for the same reason. In addition to valuable nutrients, whole mushrooms also provide healthful dietary fiber that acts as prebiotic platforms for the growth of probiotic organisms in your gut, which is very important for digestive health. This is yet another reason to opt for a whole food mushroom product. 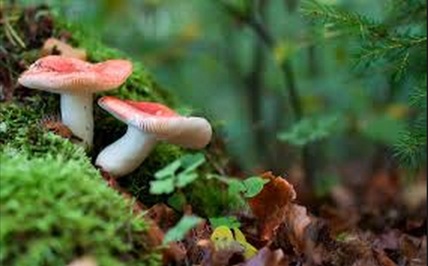 SOME GOOD WEBSITES ON RAW FOOD