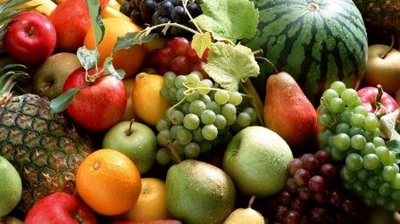 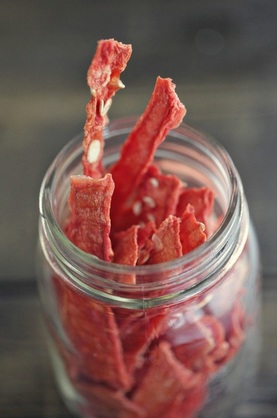 If you have ever tasted a watermelon, it is probably no surprise to you why this juicy, refreshing fruit has this name. Watermelon has an extremely high water content, approximately 92%, giving its flesh a juicy and thirst-quenching texture while still also subtly crunchy. As a member of the Cucurbitaceae family, the watermelon is related to the cantaloupe, squash, pumpkin, cucumber, and gourd that grow on vines on the ground. Watermelons can be round, oblong, or spherical in shape and feature thick green rinds that are often spotted or striped. (Many people report, however, that they like the taste and predictable ripeness of a watermelon best if the watermelon is symmetrical in shape.) Watermelons range in size from a few pounds to upward of ninety pounds. Between 600–1,200 different varieties of watermelon exist worldwide, but all of these varieties belong to the same scientific genus and species of plant, called Citrullis lanatus.

While we often associate a deep red/pink color with watermelons, there are many varieties that feature orange, yellow, or white flesh. These varieties are typically lower in the carotenoid lycopene than red/pink varieties.

Ten years ago, it was somewhat rare to find seedless watermelons in the marketplace. Today, up to 85% of all watermelons produced in the U.S. are estimated to be seedless. This great increase in the availability of seedless watermelons is due to the vastly increased use of "non-bearing pollinators" by watermelon growers. Previously, growers were required to interplant rows of acreage with seeded, fruit-bearing watermelons in order to pollinate their seedless varieties. Today, they are able to pollinate with plants that produce flowers needed by bees, but yield no fruit. These non-fruit-bearing plants allow pollination to continue, but in a less time-consuming and space-consuming way. It's possible to grow seedless watermelons most anywhere that seeded watermelons will grow. Some of the more common seedless varieties include Fandango, Super Cool, Honeyheart, King of Hearts, Queen of Hearts, Crimson Trio, Scarlet Trio, and SuperSweet. 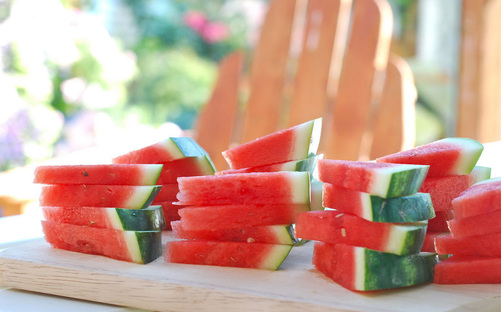 History
Watermelons are generally believed to have originated in Africa several thousand years ago and to have traveled over time from Africa to Asia to Europe to North America. Their arrival in Asia and the Middle East is believed to date back to approximately 900–1,000 A.D., and their arrival in Europe is estimated to have occurred in 1300–1400 A.D. It was not until Europeans began to colonize North America that watermelons arrived in what is now the U.S.

Today, over four billion pounds of watermelon are produced each year in the U.S. About 85% of watermelons are purchased in fresh form by consumers. Although there is some watermelon production in virtually all states, about three-fourths of all U.S. watermelons are grown in Florida, California, Texas, Georgia, and Indiana. On an average, per person basis, we eat over 15 pounds of fresh watermelon each year.

On a global basis, China is by far the largest watermelon-producing country and accounts for over half of all world production. The European Union countries, Iran, Turkey, Egypt, Brazil, and the United States are the next largest watermelon producers, but each produces less than 5% of the world total.

How to Select and Store
If you are purchasing a pre-cut watermelon that has already been sliced into halves or quarters, choose the flesh that is deepest in color and lacks any white streaking. If the watermelon is seeded, the seeds should also be deep in color, or white. 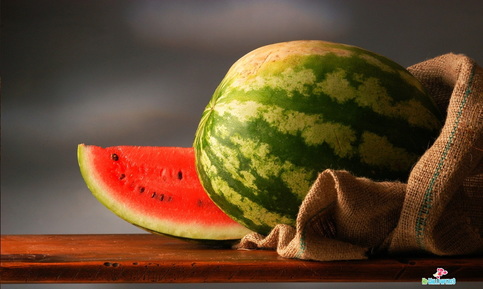 Perhaps most controversial about ripeness testing of a watermelon is whether or not to give it a thump. We've read many arguments both pro and con. However, among experts who recommend thumping, most seem to agree that a fully ripened watermelon will have a deeper, hollower "bass" sound rather than a solid and shallow "soprano" sound.

Finally, some grocers will be willing to core an uncut watermelon so that you can have an actual taste. (If you decide not to purchase the melon, the grocer can slice it up and sell it in sliced form.) So consider requesting this if you are uncertain as to the quality.

Uncut watermelons are best stored at temperatures of 50-60°F (10–16°C). In many regions, room temperatures will typically be warmer than 60°F and may be less than ideal for whole watermelon storage due to increased risk of decay. Better storage temperatures will typically be found in cellars or basements that are partly or completely below ground level. While we've seen one study showing increases in lycopene content when whole watermelon was stored at a temperature of 68°F (20°C), we believe that a fully-ripe or close-to-fully-ripe melon will already have outstanding lycopene content and that it would be better for you to err on the safe side in terms of decay risk if you are planning to wait several days before slicing open your watermelon.

Like temperatures above 60°F (16°C), temperatures much below 50°F (10°C) are not recommended for storage of uncut watermelons. This is due to increased risk of chilling-type injury that can decrease shelf life and flavor. (Therefore, the refrigerator would not be a good place for you to store a whole, uncut watermelon for this reason.)

With uncut, whole watermelon, one final storage precaution would be the avoidance of contact with high ethylene-producing foods like passion fruit, apples, peaches, pears, and papaya. Watermelons are ethylene-sensitive fruits that may become overly ripe too quickly under these circumstances.

Once cut, watermelons should be refrigerated in order to best preserve their freshness, taste, and juiciness. Store your cut watermelon in a sealed, hard plastic or glass container with a lid. 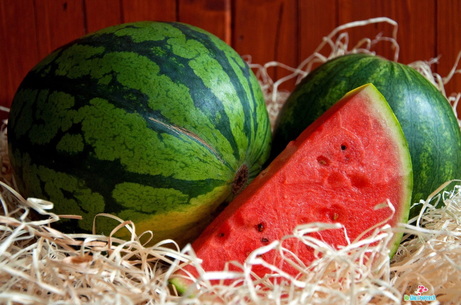 Tips for Preparing WatermelonWash the watermelon before cutting it. Due to its large size, you will probably not be able to run it under water in the sink. Instead, wash it with a wet cloth or paper towel.

Depending upon the size that you desire, there are many ways to cut a watermelon. The flesh can be sliced, cubed, or scooped into balls. Watermelon is delicious to eat as is, while it also makes a delightful addition to a fruit salad.

While many people are just accustomed to eating the juicy flesh of the watermelon, both the seeds and the rind are also edible and nutrient-rich. (In fact, in many parts of the world, watermelon seeds are widely enjoyed as a snack and pickled watermelon rind has a rich culinary tradition.) If you choose to eat the rind, we recommend purchase of certified organic watermelon. (The reason for this suggestion is an increased risk of unwanted contaminants like pesticide residues on the outer skin of non-organic watermelon.) 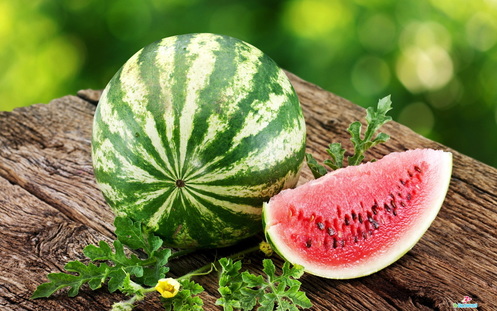