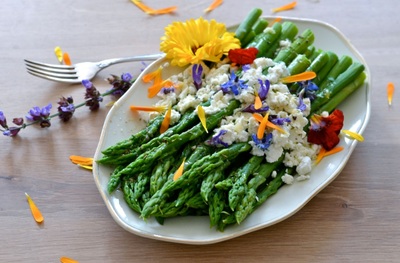 Masanobu Fukuoka is a farmer/philosopher who lives on the Island of Shikoku, in southern Japan. His farming technique requires no machines, no chemicals and very little weeding. He does not plow the soil or use prepared compost and yet the condition of the soil in his orchards and fields improve each year. His method creates no pollution and does not require fossil fuels. His method requires less labor than any other, yet the yields in his orchard and fields compare favorably with the most productive Japanese farms which use all the technical know-how of modern science.

How is this possible? I admit, when I first went to his farm in 1973 I was skeptical. But there was the proof - beautiful grain crops in the fields, healthy orchard trees growing with a ground cover of vegetables, weeds and white clover. Over the two-year period I lived and worked there; his techniques and philosophy gradually became clear to me.

I had not heard of permaculture at the time, but I can see now that Fukuoka's farm is a classic working model of permaculture design. It is remarkable that Fukuoka and Bill Mollison, working independently, on two different continents with entirely different environmental conditions should come up with such similar solutions to the question, "How can people live on this planet sustainably and in harmony with nature?" Both claim that the principles of their system can be adapted to any climatic area. 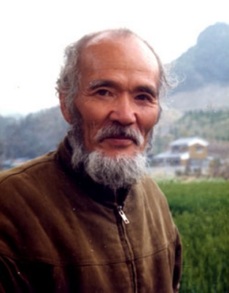 Mollison and Fukuoka took entirely different routes to get to essentially the same place. Permaculture is a design system which aims to maximize the functional connection of its elements. It integrates raising crops and animals with careful water management. Homes and other structures are designed for maximum energy efficiency. Everything is made to work together and evolve over time to blend harmoniously into a complete and sustainable agricultural system.

The key word here is design. Permaculture is a consciously designed system. The designer carefully uses his/her knowledge, skill and sensitivity to make a plan, then implement it. Fukuoka created natural farming from a completely different perspective.

The idea for natural farming came to Fukuoka when he was about twenty five years old. One morning, as he sat at sunrise on a bluff overlooking Yokohama Bay, a flash of inspiration occurred. He saw that nature was perfect just as it is. Problems arise when people try to improve upon nature and use nature strictly for human benefit. He tried to explain this understanding to others, but when they could not understand he made a decision to return to his family farm. He decided to create a concrete example of his understanding by applying it to agriculture. 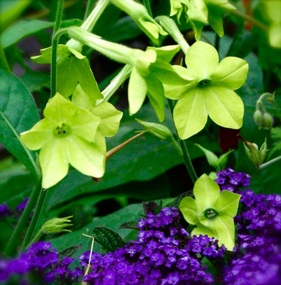 The basic idea for his rice growing came to him one day when he happened to pass an old field which had been left unused and unplowed for many years. There he saw healthy rice seedlings sprouting through a tangle of grasses and weeds. From that time on he stopped sowing rice seed in the spring and, instead, put the seed out in the fall when it would naturally have fallen to the ground. Instead of plowing to get rid of weeds he learned to control them with a ground cover of white clover and a mulch of barley straw. Once he has tilted the balance slightly in favor of his crops Fukuoka interferes as little as possible with the plant and animal communities in his fields.

This is not to say that Fukuoka did not experiment. For example, he tried more than twenty different ground covers before noticing that white clover was the only one which held back weeds effectively. It also fixes nitrogen so it improves the soil. He tried spreading the straw neatly over the fields but found the rice seeds could not make their way through. In one corner of the field, however, where the straw had scattered every which way, the seedlings emerged. The next year he scattered the straw across the entire field. There were years when his experiments resulted in almost a total crop loss, but in small areas things worked out well. He closely observed what was different in that part of the field and next year the results were better. The point is, he had no preconceived idea of what would work the best. He tried many things and took the direction nature revealed. As far as possible, Fukuoka was trying to take the human intellect out of the decision making process. 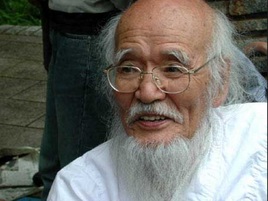 His vegetable growing also reflects this idea. He grows vegetables in the spaces between the citrus trees in the orchard. Instead of deciding which vegetables would do well in which locations he mixes all the seeds together and scatters them everywhere. He lets the vegetables find their own location, often in areas he would have least have expected. The vegetables reseed themselves and move around the orchard from year to year. Vegetables grown this way stronger and gradually revert to the form of their semi-wild ancestors.

I mentioned that Fukuoka's farm is a fine model of permaculture design. In Zone 1, nearest his family home in the village, he and his family maintain a vegetable garden in the traditional Japanese style. Kitchen scraps are dug into the rows, are crops rotated and chickens run freely. This garden is really an extension of the home living area.

Zone 2 is his grain fields. He grows a crop of rice and one of barley every year. Because he returns the straw to the fields and has the ground cover of white clover the soil actually improves each year. The natural balance of insects and a healthy soil keep insect and disease infestations to a minimum. Until Bill Mollison read The One-Straw Revolution he said he had no idea of how to include grain growing in his permaculture designs. All the agricultural models involved plowing the soil, a practice he does not agree with. Now he includes Fukuoka's no-tillage technique in his teaching.

Zone 3 is the orchard. The main tree crop is Mandarin oranges, but he also grows many other fruit trees, native shrubs and other native and ornamental trees. The upper story is tall trees, many of which fix nitrogen and so improve the soil deep down. The middle story is the citrus and other fruit trees. The ground is covered with a riotous mixture of weeds, vegetables, herbs and white clover. Chickens run freely. This multi-tiered orchard area came about through a natural evolution rather than conscious design. It still contains many of the basic permacultural design features. It has many different plant and species, maximizes surface area, contains solar sunlight "traps" and maintains a natural balance of insect populations. 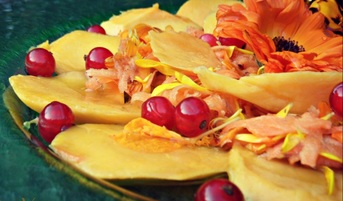 Fukuoka invites visitors from Zone 4 anytime. Wild animals and birds come and go freely. The surrounding forest is the source of mushrooms, wild herbs and vegetables. It is also an inspiration. "To get an idea of the perfection and abundance of nature," Fukuoka says, "take a walk into the forest sometime. There, the animals, tall trees and shrubs are living together in harmony. All of this came about without benefit of human ingenuity or intervention."

What is remarkable is that Fukuoka's natural farming and permaculture should resemble each other so closely despite their nearly opposite approaches. Permaculture relies on the human intellect to devise a strategy to live abundantly and sustainably within nature. Fukuoka sees the human intellect as the culprit serving only to separate people from nature. The "one mountain top, many paths" adage seems to apply here.

Natural farming and permaculture share a profound debt to each other. The many examples of permaculture throughout the world show that a natural farming system is truly universal. It can be applied to arid climates as well as humid, temperate Japan. Also, the worldwide permaculture movement is an inspiration to Fukuoka. For many years he worked virtually alone in his work. For most of his life Japan was not receptive to his message. He had to self-publish his books because no publisher would take a chance on someone so far from the mainstream. When his experiments resulted in failure the other villagers would ridicule his work. In the mid-1980's he came to a Permaculture Convergence in Olympia, Washington and met Bill Mollison. There were nearly one thousand people there. He was overwhelmed and heartened by the number and sincerity of the like-thinking people he met. He thanked Mollison for "creating this network of bright, energetic people working to help save the planet." "Now," he said, "for the first time in my life I have hope for the future." 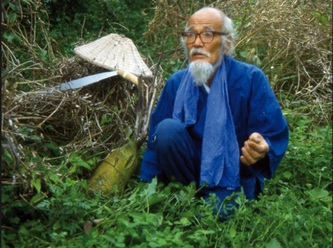 In turn, permaculture has adopted many things from Fukuoka. Besides the many agricultural techniques, such as continuous no-tillage grain growing and growing vegetables like wild plants, permaculture has also learned an important new approach for devising practical strategies. Most importantly, the philosophy of natural farming has given permaculture a truly spiritual basis lacking in its earlier teachings.

Fukuoka believes that natural farming proceeds from the spiritual health of the individual. He considers the healing of the land and the purification of the human spirit to be one process, and he proposes a way of life and a way of farming in which this process can take place. "Natural farming is not just for growing crops," he says, "it is for the cultivation and perfection of human beings."