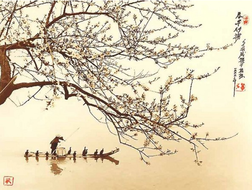 We will continue in advancing a set of excersices offered to you by the students of Carlos Castanda... BUt befoer we start on this I want you to read this piece of beautiful writing ane meditate on it... Let's make everything including the brushes we use for painting our lives the extention of our souls: creative and bottomless...

A chance reading recently from Traces of the Brush: The Art of Japanese Calligraphy, by Louise Boudonnat and Harumi Jushizaki, has got me thinking about something that painters often take for granted, the humble brush; and how something as simple as one’s attitude toward this ubiquitous tool can have such a profound effect on one’s art.

The brush is almost synonymous with both eastern and western painting, but their differing attitudes towards the brush are instructive. In the painting studio at OWU, for example, I routinely pick up brushes abandoned by students, their once supple bristles concretized by dried paint or gesso. I have an entire box of these massacred brushes, the sight of which is sad indeed. To the Japanese painters of past ages, the brush was not just a tool, it was a living thing. A good brush, in the hands of a Hokusai or a Yoshitoshi was an extension of the body itself – a conduit, or a gateway between the invisible and the visible.

From its beginnings at the hands of the brush maker who shaped it, to the end of its useful life, when it would be ritually buried with Buddhist or Shinto rites, an attitude of reverence toward the brush, and to all tools of his art, guided the practice of the Japanese artist. Such reverence and animism invested in material objects seems quaint, even superstitious, to the contemporary western mind which tends to view matter as merely something to be appropriated to one’s purpose and discarded. But, while a proper regard for the tools of one’s trade doesn’t necessarily make the craftsman, it is often the beginning step on the path of becoming one.

From Traces of the Brush: The Art of Japanese Calligraphy:

“The painter, or the draftsman with a brush, is a calligrapher; the marks she makes are a kind of writing made by the individual hand of the artist. Her marks are as unique as her own handwriting.

In eastern art one finds long, venerable traditions of brush calligraphy. The art of painting in eastern cultures is an extension of these traditions, not something completely different. For the artist in China or Japan, to use the brush well demands a complete attention to the particular instrument so that there is no separation of the maker and the made. The brush must become an extension of the body and channels the emotions and the spirit of the mark-maker to the painting surface.

It has its own life force. In Japanese brushes, or wa-fude, the craftsman places two or three hairs at the tip. These form the axis and are like its life line. Indeed, they are called the inochige or “hair of life.” When the inochige are worn, the brush’s energy wanes and its life comes to an end. To underscore the Japanese brush’s living quality and it s similarity to man its parts are known as “the loins” (koshi), “belly” (hara), “shoulders” (kata), and “throat” (nodo).

Just like a person, a brush has its own secret personality that only the calligrapher can get to know over the course of time. Sakaki Bakusan is a contemporary calligrapher who uses the brushes made by the master craftsman Hokodo Shisei. he is fascinated by the vitality and power that he can sense in each one. This is how he describes the experience of using them:

‘When he dips one of his brushes in the ink and touches the paper, it is a bit like mounting a racehorse and understanding and sharing its profound intelligence. He is one with it, as the rider is with his steed. And the brush that runs freely over the pristine space of the sheet listens and hears the calligrapher’s soul. Hokodo creates his brushes out of an intimate knowledge of each artist’s personality. For the elegant and the precious, he makes a supple, pliant brush. For those who fear neither mystery nor danger, he animates it with a ghostly life force that will answer the calligrapher’s own strange feelings. Another more fiery, powerful personality he will entrust with a brush whose lively, surprising character is that of a young woman. Each of the instruments fashioned by Master Hokodo speaks with a singular voice. This one orders: “Use me as often as you can!” This other one is discreet and likes to be forgotten, the better to murmur one morning to the calligrapher, “Today.” “I hate sticky ink!” says one, while another insists, “Wield me with more energy!”‘

… Of all the treasures owned by the scholar, the brush is the most alive but also the most short-lived. To mark this link, this intimacy, the Japanese have a strange, centuries-old custom: brushes are buried in a Buddhist temple or Shinto shrine. Because, for the Japanese, brushes have their own life and soul, the calligrapher watches over their spirit in order to ensure their benevolence.”

...back to our exercises

06: MASSAGING THE GLANDS AROUND THE SHOULDER BLADES
07 THE AXIS BREATH
08: FORGING THE CENTRAL POWER OF THE BODY
09: TWO PRONGS ON THE FACE
10: REACHING THE ENERGY HOLE ABOVE THE HEAD
I am also publishing a link here I got from a friend from work on How to Meditate. You will find it very useful.

... and one more link for today that I got yesterday from Milan Mandic: http://www.shaktitechnology.com/shiva/index.htm