Motoradrennen auf der Insel Mann (GB)  über 300kph teilweise GÜCKEN !!!!!!
This is another Isle of Man camera video done really well. It lasts about five minutes. There are a couple more at this same location.
Keep in mind that this is the last true motorcycle road race in the world.
Each lap is 37.75 miles long with over 200 turns.
And the record for a single lap is over 130 MPH. There are straight sections where the bikes hit over 200 MPH.
It is hard to imagine such riding speeds but they do it every year at the end of May and have been doing so since 1907.
There have been over 240 rider fatalities in the history of the event but it is bigger than ever today.
Two riders were killed during the 2012 events.
The helmet cam video over the last minute or so of the clip is breathtaking. This event makes car racers look like a bunch of sissies.
Even Sir Jackie Stewart is amazed by what he is seeing in the video.
BTW, former Formula One World Champion John Surtees won this event before he switched from motorcycles to race cars.
Here's the video:
Mary Roach: 10 things you didn't know about orgasm
Mountainbikers rally
Guillaume Nery base jumping at Dean's Blue Hole

World champion freediver Guillaume Nery special dive at Dean's Blue Hole, the deepest blue hole in the world filmed entirely on breath hold by the french champion Julie Gautier. This video is a FICTION and an ARTISTIC PROJECT. Edited by BLUENERY (c). Music: ARCHIVE - you make me feel.
Japanese Geisha

Japan. Is Geisha a living art?

Geishas are not wives nor they are courtesans; they sell art, not body. They create a different, mystical world where beauty is the ruler. The word geisha in literal translation means: “artier”. To be a geisha means to be a living piece of art.

The word geisha has Japanese origins. It comes from the word “gei-sia” that means “a person of art”. The hieroglyph for this word looks like this: 芸者 “Gei” means art and “sia” means man. Primitively speaking and it is accepted widely that geisha is a Japanese actress, who entertains men, but you should never think low about it… Low? Let’s talk about it a bit later. How geisha could entertain men? Of course there is dancing, tea ceremony, singing, that geisha has to perform perfectly but there is nothing more important for a man than a sincere conversation.
It is well known that first geishas appeared in 17th century. They appeared in the largest cities at that time: Tokyo, Osaka and Kyoto. They also remain the largest cities nowadays. There were regions in these cities where Japanese men could rest, have a feast with friends, gossip and... sin of course. You will think: oh, poor geishas – they had to spend time with men. But I have to surprise you. The first geishas were MEN! Yes, yes, men themselves – the actors of kabuki theater. There were two professions that shaped in the city areas: one and the oldest of all – such women were called u-dzyo. But the entertainers were called gei-sia. Year 1751 was the most significant it the row of these events as it was the time when a first woman appeared who was gei-sia. Well, gei-sia (or further – geisha) mainly were entertaining their clients with a merry and intelligent talk. How could you avoid such company when you are resting? They also played a Japanese traditional music instrument called samisen. In the middle of 16th century a new string instrument was introduced To Japan. It was brought through the Ryukyu Islands and called dziabisen. It was modified by Japanese into samisen. 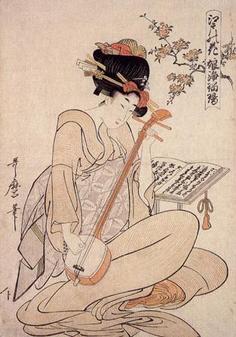 The major cultural centre for geishas now is Kyoto, Osaka and Tokyo where they firstly appeared in the 17th century. More to that: if there were men playing these roles at the beginning – actors and musicians of kabuki theatre, then later this profession main figures were slowly taken by women only. The golden age of geishas was 19th century. They were real stars, muses for many poets and artists. There were lots of traditions established in this profession at that time that remain the same till nowadays. There were only two ways for a Japanese woman those days: good wife or brothel. But geishas showed the third way of “beautiful flowers of the willow world” (harukai), where they managed to be well-known as aristocrats. Their way of life was very well defined: they spent time in the large cities especially before WWII. Such areas were called hanamati (a town of flowers). The most famous city areas are Gion Kobu, Kamicitiken and Ponto-Tyo, where traditional way of life of geishas remains the same and is still very well defined.

The geishas’ labour takes place in tea houses and traditional Japanese restaurants where geisha is the host of the party. She entertains her guests (men and women). Geisha has to direct the conversation and should maintain a merry time-spending atmosphere for her guests, sometimes even flirting with them, but keeping her dignity. Geishas wages in the tea houses are  defined hourly rates for her services. Apart from that geishas receive tips called flower-money. The economics of hanamati’s life is managed by kambukan. She counts all the income from geishas and publishes the most successful ones. This is how the information about Mineko Ivasaki, the highest paid geisha of all times, slipped into public. 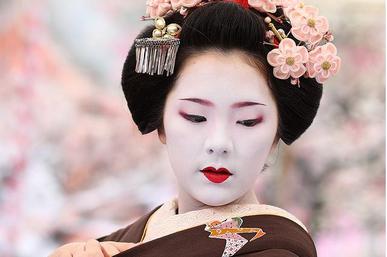 Mineko Ivasaki
The girls whose faith was to be a geisha were raised to be positive. They were taught to be happy about everything. Beautiful sunset, wind blow, a flower – all of these is a good reason to be happy. When they grew up they became calm and confident women.

Life and duties of small girls, the future geishas, from the early age was to remain in geisha houses – okia, where they were often sold to by their poor Japanese families. They had to work as servants in their childhood, then as assistants to the main geishas in the house. The older geishas taught the girls the basics of the future profession and then helped them with education. It is traditional in Japan when the student lives in his teacher’s house and this student is a servant at the beginning, then he becomes his teacher’s assistant and then the teacher educates him in music or some other art and slowly the student becomes a master. 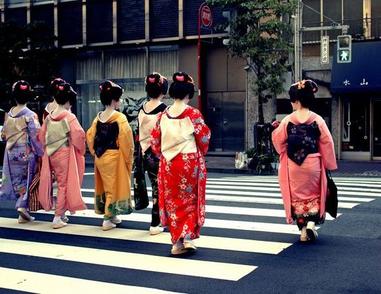 The course of study in such special schools involves different art forms that the geisha should have: music instrument playing – this was traditional Japanese luteya – samisen or shamisen, playing a flute (called fue) and the drum that is called tsutsumi; she had to know traditional singing technique, traditional dancing, the art of tea ceremony, the art of ikebana, poetry, calligraphy and fine art – so all the arts that will allow geisha to entertain her clients in the future. The geisha to become is registered while she studies. That shouldl help her to have good relationship with tea houses in the future. Studding is part of geisha’s life till she remains in her profession – she never stops learning.

There is a compulsory mid school education in Japan. A girl cannot become 'maiko' till she is 15 and till she has her mid school certificate. After that she can make an arrangement with one of the geisha houses (okia) owners and become a servant there. Sikomi is performing house duties, cleans the house and helps her older 'sisters' to get dressed. In half a year, following the rules of Kyoto, after exams there is a ceremony of initiation, misedaci. From this time the apprentice becomes a young geisha (maiko) and she gets a new name. Maiko has to change her hair style 5 times. Her hair symbolises her next step in becoming a mature geisha. Before she changes her childish jewellery and pins to the ones that suite geisha status there is a collar (erikae) change as well. Maiko’s collar is embroided with white and golden threads, the mature geishas wear plain white collars. At the erikae ceremony a bunch of hair is cut off as a symbol of a maturity and a transmission from a girl into a young woman. The last hairstyle that maiko wears has its roots in wedding hairstyles of the past; that is why Lisa Delby calls the ceremony erikae – engagement. Maiko becomes geisha at 20-21 depending on her success and the okia owner order and will. 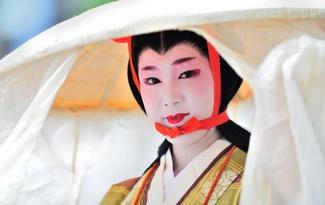 Geisha is free to work on her own schedule from the age of 18 however only successful geishas have such choice and usually they are the geishas who receive lots of invitations to the parties and events. Geisha has opportunity to get a danna or a sponsor. He can be her lover or simply her mecenate. Usually very close relationship and love affair connect geisha and her danna. They can even have kids. Danna’s responsibility is to cover all the current expenses his geisha has including her kimono purchase. Having danna is not a mandatory element of geisha’s life but usually geisha has no chance to leave okia and to become a super star of her profession if she does not have one.

Despite a common opinion geishas are not prostitutes. In Japanese entertainment industry geishas and prostitutes historically had different places. It could be observed even in their outfits: a prostitute ties her scarf around her kimono with a simple knot in the front – that would help her to take it off many times during the day. The knot on the kimono's scarf in geisha outfit is tied up with a complex knot at the back of her dress. She can not undo it herself, without the help of others nor can she tie it up herself. Apart from different ways of wearing kimono waist scarfs there are lots of differences in other dress and hair style features that could allow people not to mix up geishas and courtesans. These features also showed the social status of a woman and her profession. Importantly enough from the moment of geisha profession appearance they were prohibited to serve sexual pleasures for money by law. 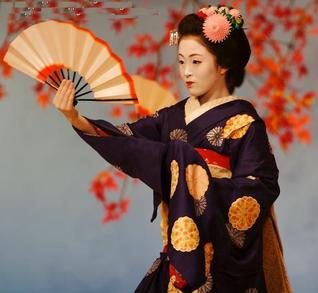 Geisha is much respected in the society; she is a symbol of femininity. However she is not a sexual servant to her client. If geisha is doing such thing than she is doing it only on her will and it is usually a part of her life not her profession. The mistakes about geisha’s duties came up public during the time of American occupation of Japan after WWII. American soldiers called gisia or geisha-girls the young Japanese girls that sold themselves to them. Lots of such girls who were short on money called themselves geishas and were definitely not the ones.