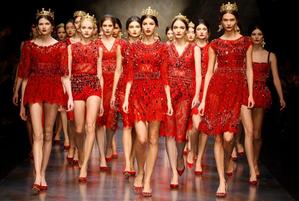 From time immemorial the Slavs believed that clothing that has been made properly and with feeling not only adorns the person, but also offers protection from evil forces.

The traditional colour symbolism of the Slavs is interesting. Siberian shamans regarded the range of colours as an instrument for influencing a person's psyche. And not by chance. Luscher's well-known colour test reveals the significance of colours for people. The length of the light wave has its own frequency, which has an influence on a person's hormonal regulation and resonates (or does not resonate) with the frequency response of impulses generated by the brain. If the frequencies coincide, we like this colour, and vice-versa. It is also well-known that a person recognizes colour not only with the eyes, but also through the skin. For that reason, the colour of our clothing constantly exerts an influence on us, even if we do not see it on us. It turns out that the nerve fibre is an exact analogue for the light pipes well-known to modern technologists. V. P. Kaznacheev investigated the peculiarities of passing a laser beam through the tissues of the human organism and confirmed the soundness of the ancient concepts of human sensitivity to light. A laser beam, directed at an acupuncture point, follows along the bioenergetic meridian and, with the aid of a photomultiplier, can be recorded at another point located on the same "energy channel."

Our ancestors were aware of this. For example, they placed a red woolen shawl on an inflamed area or an erysipelatous inflammation; and if a person often suffered from hysterics, then sometimes the eyes were wrapped with a green cloth and he was placed for some time in a stack of freshly mown hay.

In the Slavic tradition, preference is given to clothing made of white linen, since according to Slavic folk concepts white represents absolute freedom from all obstacles, freedom for all possibilities. White also represents the resolution of problems, a new beginning.

It goes without saying that the everyday clothing worn by our ancestors was of the most varied colours and shades, but as far as the ceremonial clothing was concerned, it was white, which facilitated the perception of the secret rite occurring at the ceremonies. It was also considered that on white clothing one could see the undistorted colour of an aura, by which purity of intentions was judged.

In the same way, our ancestors believed that the human biofield “soaks” into clothing. It is precisely for this reason that in olden times, and also today, psychics can, by handling clothing, talk about the owner of the clothing, and a sorcerer can cause harm by using one thread taken from clothing.

In the opinion of the ancients, it was necessary "to protect" all the openings in the clothing (collar, hem, sleeves), and in this way defend the energy centres and channels of the human body against the penetration of dark energies. The protective charm here was the embroidery, which contained all possible sacred images and magic symbols. 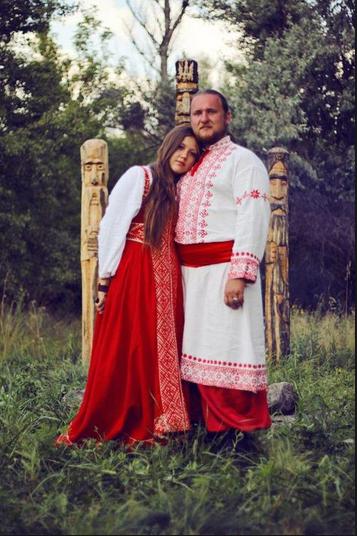 The basic colour in embroidery was red. This colour symbolized the fire of the sun and blood, personifying the life force and the masculine nature. Protective clothing for children was embroidered exclusively with red thread. Red organically complemented black - the colour of Mother Earth, the symbol of fertility, which women used to protect their womb from sterility. On men's clothing dark blue and green was often seen: dark blue, which symbolized the sky and water, did not permit the wearer to perish from the raging elements, and also facilitated reflection and self-improvement; while green, appearing as a symbol of vegetation and life, protected the wearer from wounds.

Even adornments were not donned for beauty by the ancients. That which we now call "jewellery" had a magical meaning in antiquity - they were sacred talismans.

In this regard, it is easy to notice that ancient Slavic women's attire included many more jewellery than the men's. The reason for this lay in the fact that a woman was considered to be more sacred than a man.

Ancient people considered that when a woman gives birth, the sacred spirit of an ancestor enters her body to become flesh once more. Modern biologists write that it is precisely the woman who preserves the "golden fund" of the genes of her tribe, nation, race; the male as a biological entity is much more subject to all sorts of changes. 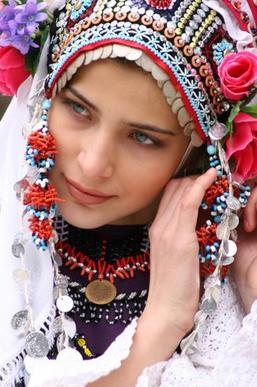 Second, it is precisely the woman who turns out to be the repository of the ancient wisdom of the tribe, its myths and legends. It is women who cultivate children’s philosophy and way of thinking, and narrate tales and legends about their family and people as a whole.

It is because of the fact that the woman was considered to be more sacred than the man that she required to be especially carefully protected. A thousand years ago, men not only wanted to adorn their daughters, sisters, and wives. They fully consciously strove to preserve and protect the most valuable thing their people possessed, strove to guard the spiritual and physical beauty of future generations against any type of encroachment.

Hence, traditional Slavic clothing and ornaments are a complex system of spiritual symbols and protective charms, each of which fulfilled a specific sacred function.