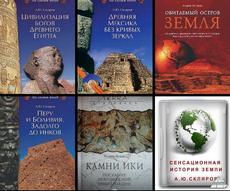 Well, let's start from the very beginning. Two years ago if you told us that civilization (human race) on our planet Earth started 4 billion years ago we would say the same as you would say now: "you must be crazy". We started watching the expedition video episodes produced by Andrei Sklyarov and his team on alternative history and gods' techinologies about two years ago and we slowly started to comprehend the whole picture of the history of human race developed on the Earth.

But... you say...Let's take plastic and our contemporary information devices. It is even worse! Do you remember the first floppy disks we all used back 20 years ago. I tried to extract some poetry written back then saved on floppies by my first husband - no luck! - even smart gurus-IT-admins could not do it with all their knowledge - it's all vanished in the land of no-where.

Contemporary technology is even worse - the devices you used 5-10 years ago are becoming obsolete faster and faster. You can not read anything stored on them now. The world is changing too fast. BTW the information on plastic CDs remains clear and untouched for say 50 years. The best scenario - you will be able to find some strange devices in about 1000 years of current civilization made out of better materials but there will be no machines to read and process what is written there.

Now imagine this: global catastrophe and half of our population is wiped out (flood, nuclear war, star war etc etc). What do you think...? This is extreme but even if there is no chance for it to happen you got the picture: everything will turn into dust, dirt and soil. What do you think will have a small chance to remain here?

Correct! - Stone! Stone (mainly solid structured granite and some types of basalt) and other materials (like ebonite, gold etc) are the best materials to save valuable information about the high technology civilizations. But even stone has its age, its life spin: 10-20 thousand years. What do we have left from all the remainings of past civilizations? Pictures and writings that might be 10-15 thousand years old unless they were hidden from oxygen, corrosion, waters, possibility of atomic sub-division and wind did not touch and destroy them.

Example: layers of civilization found in assorted places on the Earth in coil mines and dried out layers of marshes. But even in such cases the authorities do everything to hide them. Why? 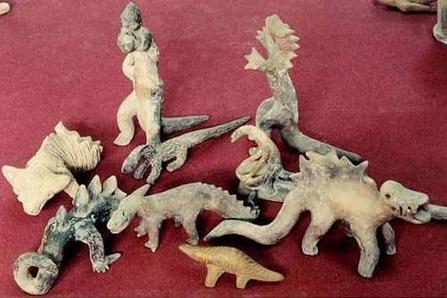 This is convenient for the authorities this way. There are hundreds of thousands degrees and PhDs, millions of scientific publications proving the opposite and all saying the same conventional thing: life is only 10 thusand years old and most likely we were all monkeys in the past. This opinion is also supported by mass media and never get questioned if you want to continue your career in the fields of archeology, history and related subjects...and people continue to think they are not more than 10000 years old, They are told that they were very stupid monkeys before and they are not smart even now as the legend of us evolving is spread around the media and no one doubting it anymore. Yes, we are still stupid now if we believe this. Is it convenient and for whom? Yes, the less you know about who we were and who we are now - the better. Because knowledge is Power and Power is dangerous. You can not control Power.

But let’s go back to our subject. More than 90% of all archeological findings get hidden in the storages in Europe. I am not mentioning any particular places here as I might get into big troubles. What is shown to you in museums of national history of civilization is simply proving the fact of our evolution: money-human. The history starts in Egypt and you probably can not find anything older than Egyptian grand civilization (cave men  - yes, but nothing goes further than that). The history then goes to Rome and Europe. There was nothing else. Well deserved PhDs, papers, documents and professors' high degrees will stand on your way if you try to prove the other way and my god save you if you mention anywhere the opinion that does not confirm the well-assured belief. The money for your research will be taken away from you, your papers will be destroyed and you in the best case scenario will be out of work and financial support in no time, then you consider your scientific career path is destroyed and there is no way you can come back to teach and research. How many examples are there of such daring people: way too many now. No one counts them. They are not in the light of modern science anymore. Anything that does not correspond to an opinion of humans evolving for the last 10 thousand years gets rejected by University authorities and higher institutions.

If I tell you now that people lived for the last 4 billion years on planet Earth, they lived shoulder to shoulder to dinosaurs (or dragons and the last one was killed not long time ago. Their kids had dragons as their pets and mammoth were families' source of milk and protein), they had one language and one civilization, they were evolved well not only in high technologies (and the technology was on much higher level than ours) but spiritually they were advanced to the extend they called themselves Gods or some were called semi-gods. They built the structures and their bases were used later by the Egyptians to build Egyptian pyramids (some of the monolites are more than 600 tons in weight), they could move megalithic forms and structures from one place to the other effortlessly as they did not have any weight at all, and they could cut the stone like butter (not even laser could compete with such processes). They were flying to the stars and communicating to the other civilizations. So it was a civilization of Gods. Now you will come with another question: have we degraded?

This is a very good question. Yes, if you consider your self a slave of the current circumstances, if you will still believe you are not God.

Scientific articles and videos made by a group of Russian scientists changed our knowledge on history of humanity and the way we perceive history at all. We watched the videos for a couple of months - may be 1-2 hours daily. They were the days of shifting our minds on a different level of understanding our origins.

The path once taken can not have any reverse or any side-roads. Today I will share one article and one video with you that might start changing your mind too... It will be about Egypt.
link: http://lah.ru/text/sklyarov/zth-book/01-text.htm

Prohibited Topics of History by Andrei Sklyarov (in Russian language):
There are other parts of the movie continued

There is one in English language that summarizes the work of Andrey Sklyarov group worked in Bolivia, Peru, Egypt, Ethiopia and other countries around the world. The summary shows proofs (the movie is made by of high ranked russian scientists) of advanced technology building megalithic structures way before the primitive Egyptians finished the pyramid construction. It proves gods' technology was used by ancient civilizations:
I will leave you with these thoughts for another month...

There is more in English. The video description reads:
A set of photos i put together after watching a series of documentaries on the topic. One of the best ones was russian team of high ranked scientists exploring Egypt, Peru and Bolivia. They used objective opinions and put everything together in a non forceful way. Hopefully someone with dub or sub it someday, but for now i offer these photos which are about 1% percent of the whole.
Here are some links to what i am talking about:
http://lah.ru/text/sklyarov/sklyarov-... Lab of alternative history.
http://www.youtube.com/watch?v=Y74mqM... Mysteries of ancient Egypt (russian)
http://www.youtube.com/watch?v=B2rPR3... Peru and Bolivia long before Incas (russian)
extraordinary stuff for who understands the said. But you can always mute and just watch, im sure you'll see something interesting.