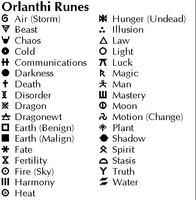 What do we know about runes and words power

You probably already heard that ancient language was made out of images. The most ancient reflected not only the sounds you pronounced the word with but the written sign and the hidden law behind the sound was attached with a high and magical meaning that is loosing or in some countries and regions on Earth is lost forever already.

So ancient language had three aspects: a sound (what you hear), a written sign (what you see) and a deep meaning (what you feel). One could not exist without the other. Sound is a simple vibration in space. It is a magic of speech and the magic of language. You remember that magicians usually use lots of signs, sounds and they put lots of meaning behind all of it. This is how they work with chants and spells. The right construction of words in the sentence can heal or can kill you. The magicians' sings exist on a different plane - they do not belong to the physical aspect of life and their action is hidden from us. I truly believe that the first language was taught to us bu gods once again we talked about in Alternative History about their civilization. How we use the language in nowadays is cruel act that kills not only imaginary part of the language itself and its magic but also us as highly spiritual beings.

The language is more complicated than we think it is. Its nature is multidimentional, not two-dinemsional as we all use to see it written on paper. It is not a simple vibration also as it comes as a simple sound int our ears. It is much more to it. That is why we say humans do not communicate by language - one sentence is said and written but there is much more to it: the energy behind it, the magic of written and pronounced. It is unlimited, endless like the Universe itself. It is not comprehensive for us as humans. We found it out with Alex when we started writing poetry as we could see the images of each others poetry not written yet and we would write similar poetry at the same time. This is how powerful the magic of love connection could be. Poetry can be written in a very simple way - with some very simple words and colors. The music of sound and the construction of the sounds - what goes after what - this is what is important - the written magic of words. It creates a picture like watercolors one can read and fall in love with the poem. The reader will never realize why. 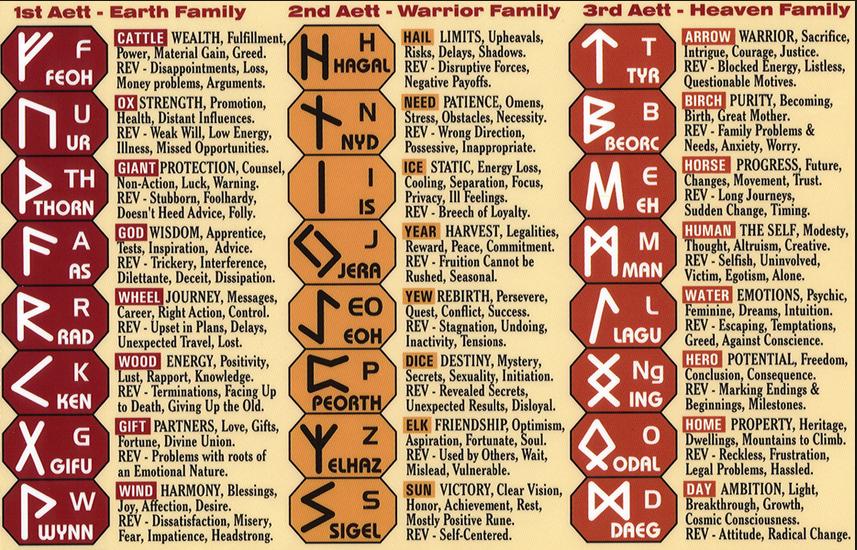 Let's talk about runes? Runes, and their sounds, the written and the magical aspects became the origins of the first language
people started using. Every rune is connected to one particular god or to one element. The rune (read: the sound) pronounced can change the world around you. You can use the rune (the word) to protect you, even to influence the other person, to cure sickness, to attract luck, love and victory. The runes like any energy have to be used wisely and not pronounced in vain. When you use words remember: you use not your tongue nor you use a pen - you use your energy and power. Every word you say should carry meaning behind it.

I went through 100-s of websites and this is the best-est I could find that reflects my thoughts:
http://norse-mythology.org/runes/

As Scandinavian scholar Catharina Raudvere notes, “The pronouncement of words was recognized to have a tremendous influence over the concerns of life. The impact of a sentence uttered aloud could not be questioned and could never be taken back – as if it had become somehow physical. … Words create reality, not the other way around.” This is, in an important sense, an anticipation of the philosophy of language advanced by the German philosopher Martin Heidegger in his seminal essay Language. For Heidegger, language is an inescapable structuring element of perception. Words don’t merely reflect our perception of the world; rather, we perceive and experience the world in the particular ways that our language demands of us. Thinking outside of language is literally unthinkable, because all thought takes place within language – hence the inherent, godlike creative powers of words... to vocalize a thought is to make that thought part of the fabric of reality, altering reality accordingly – perhaps not absolutely, but in some important measure.

Each of the runes represents a phoneme – the smallest unit of sound in a language, such as “t,” “s,” “r,” etc. – and as such is a transposition of a phoneme into a visual form.

Most modern linguists take it for granted that the relationship between the signified (the concrete reality referred to by a word) and the signifier (the sounds used to vocalize that word) is arbitrary.[23][24][25] However, a minority of linguists embrace an opposing theory known as “phonosemantics:” the idea that there is, in fact, a meaningful connection between the sounds that make up a word and the word’s meaning. To put this another way, the phoneme itself carries an inherent meaning. The meaning of the word “thorn,” for example, derives in large part from the combined meaning of the phonemes “th,” “o,” “r,” and “n.” 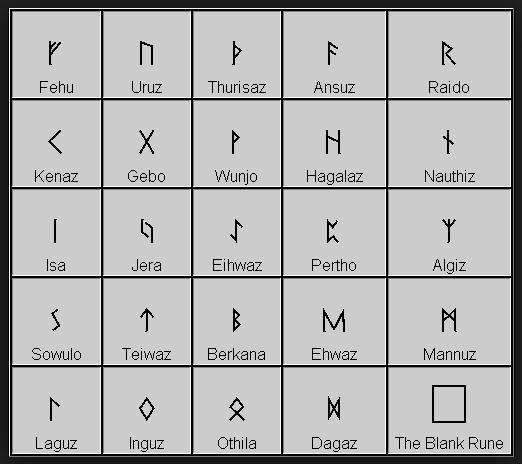 The phonosemantic view of language is in agreement with the traditional northern European view, where “words create reality, not the other way around.” The runes, as transpositions of phonemes, bring the inherent creative powers of speech into a visual medium.... there is the mysterious animistic power carried by the phoneme itself.

Thus, the runes were not only a means of fostering communication between two or more humans. Being intrinsically meaningful symbols that could be read and understood by at least some nonhuman beings, they could facilitate communication between humankind and the invisible powers who animate the visible world, providing the basis for a plethora of magical acts.

In the verses from the Völuspá quoted above, we see that the carving of runes is one of the primary means by which the Norns establish the initial framework of the destiny of all beings (the other most often-noted method being weaving). Given that the ability to alter the course of destiny is one of the central concerns of traditional Germanic magic, it should come as no surprise that the runes, as an extremely potent means of redirecting destiny, and as inherently meaningful symbols, were thereby inherently magical by their very nature. This is a controversial statement to make nowadays, since some scholars insist that, while the runes may have sometimes been used for magical purposes, they were not, in and of themselves, magical... the signs themselves do possess immanent magical attributes that work in particular ways regardless of the intended uses to which they’re put by humans...

NM: ... and nowadays the hand writing is completely taken over by typing on computers, the words and its magic is loosing its powers even more. That's why when we write poetry we write with hands as the spirit works through hands carving the words, the sounds, the symbols and the magic...

Next time I will tell you about the meaning of each rune and we will talk about more complex constructions: creating words from runes. Happy journey! 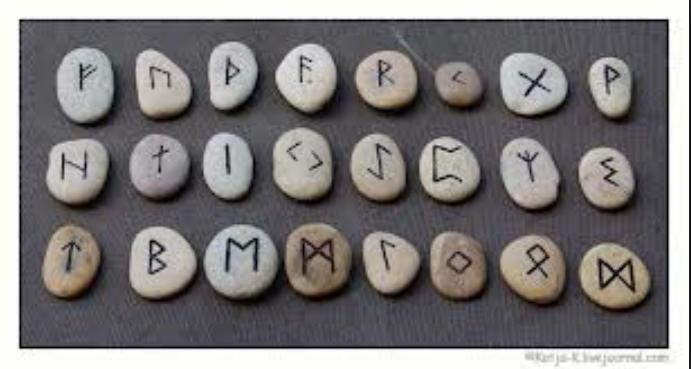 NM: "written on water" phrase nowadays has a meaning of "soon to be forgotten", "unstable" and even "a lie" although it had a very deep meaning in older days as it was connected to a ritual of runes magicians and people of knowledge were writing on water to energize and empower it in a certain way. the meaning has changed due to the new believes enforced and projected on us...
Displaying page: Good Advice Magazine >> Knowledge >> Linguistics and History of Language - 01
Knowledge other articles:  08  07  06  05  04  03 02  01