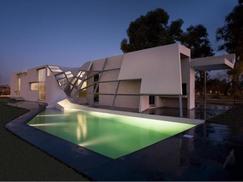 Argentinian architecture practice BAK arquitectos ran a successful collaboration between 2000 and 2012, designing a number of architecturally-notable houses. In December 2012, the partners Luciano Kruk and María Victoria Besonías decided to go their separate ways to set up two different practices. As a celebration of their work, The Modern House has rounded up a selection of their most interesting work over the last few years. As it happens, these houses are all located in Mar Azul near Buenos Aires. BAK have made a particularly significant impact on this area, designing in total 14 detached dwellings, of which the last is still under construction. The architects have a distinctive use of disembodied walls and roofs, floor to ceiling glazing, floor plates stepping down the landscape and béton brut (timber-shuttering printed, roughly finished concrete).
Goulding House by Scott Tallon Walker, Ireland
source

Mies van der Rohe-inspired Goulding House was designed by Dublin-based Scott Tallon Walker architects between 1971 and 1973. The house, which is located on the luscious banks of the River Dargle in rural County Wicklow, south of Dublin, was fully restored in 2002. The house was originally designed for Sir Basil Goulding: a great gardener and art collector. He and his wife, Lady Goulding, hence wanted their summerhouse for hosting parties and conferences to occupy as little of the garden as possible. The resulting design is a single-storey, 10-metre cantilever building over the river, and is supported on the only rock outcrop available without disturbing the natural vegetation of the gorge. Diagonal bracing effectively converts the side elevations into beam structures, and a steel column on the rock below together with rock anchors make possible the three-bay cantilever over the river. The final two bays are fully glazed, whilst the three bays nearest the bank are clad in cedar which softens the otherwise crisp High-Tech architecture.
Rem Koolhaas’ Maison à Bordeaux
source

This week’s House of the Week has to be one of the most architecturally exciting houses of the1990s. Designed by Dutch practice OMA in 1998, Maison à Bordeaux is a private residence on a hilltop overlooking the city in France. The house comprises three levels, of which the lower level is a series of rooms carved out of the hill, designed for the most intimate life of the family; the ground floor on garden level is a glass room – half inside, half outside – for living; and the upper floor is divided into a children’s and a parents’ area. Aside from its playful use of materials, full-height round windows and doors, stacked volumes, elements and cantilevers, the most fascinating feature of the house is a 3m x 3.5m open elevator platform in the centre of the home. Designed as a floating floor, this platform functions as the study for the man of the house who requires the use of a wheelchair after a serious car accident several years before the house was commissioned. The floor moves freely between the three levels to become part of the living space, kitchen, wine cellar or an intimate library and office space. The house has also been the subject of an endearing and entertaining film entitled Koolhaas Houselife by Ila Bêka and Louise Lemoîne about its maintenance. To see more about the film and watch a trailer, visit: Koolhaas Houselife, and for more information about OMA, visit: OMA
Galvani House by Christian Pottgiesser
source

As part of yesterday’s post about the tightness of space in British homes compared to Europe, The Modern House introduced the French architect Christian Pottgiesser in the images. Today, we have decided to make another Pottgiesser design our House of the Week. Galvani House was completed by the architect in 2003 and is an infill building located between two bourgeois homes in Paris. The building is a kind of rear gateway extension to a small, three-storey Parisian mansion and was commissioned to accommodate a further seven inhabitants. The site already started out with a garden which the clients wanted to retain and Pottgiesser made possible by opening up the building at ground level using glazing. Inside is a sloping rock garden with two enclosed staircases, one of which leads to the upper levels and the other leads down into the basement, a living space, which runs the length of the site, connecting the old building with the new. The visible slope at ground level cleverly hides a garage. The detailing within the house, including its unusual staircases which are suspended off the ground, its overlapping of spaces and levels, and its use of stone and timber, has been likened to the work of Mexican architect Luis Barragán. To see more information about the project and for drawings visit: Christian Pottgiesser
Displaying page: Good Advice Magazine >> Home and Garden >> Architecture... >> 16
Architecture and building design other articles:    16  15  14  13  12 11 10 09  08  07  06  05  04  03  02  01