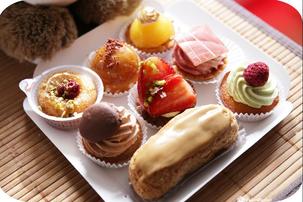 COFFEE ARRANGEMENTS with some sweets from European Bazaar Shop North Road Ormond NEW
We continue talking about different coffee drinks as we started in our previous articles.

We all know and love

as Melbourne is considered a Cappuccino Capital of the World (I very much suspect it is the same as locals believe that Saint Kilda is the world famous place. I saw them asking children in African countries - they have no idea where and what St Kilda is... but that's enough humor for this article and let's be very serious as cappuccino is a very serious and sexy drink...) what do we know about it?

Cappuccino is a coffee-based drink prepared with espresso, hot milk, and steamed milk foam. A cappuccino differs from a caffè latte in that it is prepared with much less steamed or textured milk than the caffè latte with the total of espresso and milk/foam making up between approximately 150 and 180 milliliters. A cappuccino usually exceeds the height of the cup, making the foam visible above the side of the cup. A cappuccino is traditionally served in a porcelain cup, which has far better heat retention characteristics than glass or paper. The foam on top of the cappuccino acts as an insulator and helps retain the heat of the liquid, allowing it to stay hotter longer.

Out of all cafes in melbourne we prefer our cappuccinos ar Brunetti in Lygon Street. Who else but Italians just know how to make it PERFECTO with their natural sense of their traditional drink! 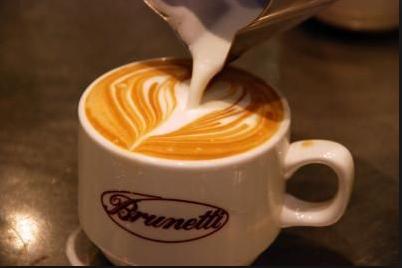 Cappuccino is very Italian coffee drink. The name comes from the Capuchin friars, referring to the colour of their habits. The Espresso is poured into the bottom third of the cup, followed by a similar amount of hot milk. The top third of the drink consists of milk foam; this foam can be decorated with artistic drawings made with the same milk, called latte art. In a traditional cappuccino, as served in Europe and artisan coffee houses in the US.

The World Barista Championships have been arranged annually since 2000, and during the course of the competition, the competing barista must produce -to four sensory judges- among other drinks four cappuccinos, defined in Rules and Regulations as a coffee and milk beverage that should produce a harmonious balance of rich, sweet milk and espresso The cappuccino is prepared with one single shot of espresso, textured milk and foam. A minimum of 1 centimeter of foam depth A cappuccino is a beverage between 150 and 180 mL in total volume.

'Cappuccino' comes from the diminutive form of Italian cappuccio meaning hood or something that covers the head. The coffee beverage has its name not from the hood but from the colour of the robes worn by monks and nuns of the capuchin order. The capuchins chose the particular design of their orders' robes both in colour and shape of the hood back in the 16th century, inspired by Francis of Assisi's preserved 13th century vestments. The long and pointed hood was characteristic and soon gave the brothers the nickname 'capuchins' (hood-wearing). It was, however the choice of red-brown as the order's vestment colour that, as early as the 17th century, saw 'capuchin' used also as a term for a specific colour. While Francis of Assisi humbly used uncoloured and un-bleached wool for his robes, the capuchins coloured their vestments to differ from Franciscans, Benedictines, Augustinians and other orders. 'Cappuccino' in its Italian form is not known in writings until the 20th century, the German-language 'Kapuziner' is mentioned in the 18th century in Austria, and is described as 'coffee with sugar, egg yolks and cream' in dictionary entries from 1800 onwards. Although it seems the 'Kapuziner' may have had whipped cream on top, it seems likely the name comes from the specific capuchin-colour of the beverage's mix of coffee, cream and eggs. 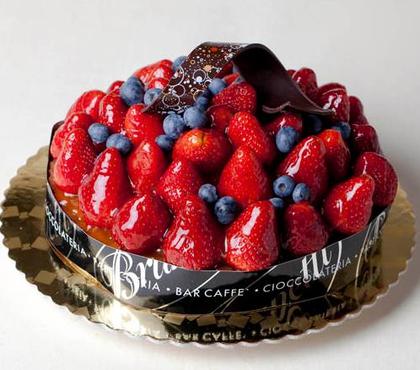 The consumption of coffee in Europe was initially based on the traditional Ottoman preparation of the drink, by bringing to boil the mixture of coffee and water together, sometimes by adding sugar. The British seem to have started filtering and steeping coffee already in the 2nd part of the 17th century and France and continental Europe followed suit. By the 19th century coffee was brewed in different devices designed for both home and public Cafés. Adding milk to coffee is mentioned by europeans already in the 1600's and sometimes advised  It seems 'Cappuccino' originated as the coffee beverage "Kapuziner" in the Viennese coffee houses in the 1700s at the same time as the counterpart "Franziskaner": 'Kapuziner' shows up on Coffee House menus all over the Austro-Hungarian Empire around this time, and is in 1805 described in a Wörterbuch (Dictionairy) as 'coffee with cream and sugar' (although it does not say how it is composed). 'Kapuziner' is mentioned again in writings in the 1850s, described as 'coffee with cream, spices and sugar'. Other coffees containing cream surfaces in Vienna, and outside Austria these are referred to as 'Viennese Coffee' or 'Café Viennois', -coffee with whipped cream-. Predecessors of Irish Coffee, sweetened coffee with different alcohols, topped with whipped cream also spreads out from Vienna.

The 'Kapuziner' obviously had its name from the colour of coffee with a few drops of cream, nicknamed so because the capuchin monks in Vienna and elsewhere wore vestments with this colour. Another popular coffee was Franziskaner, with more cream (or milk), referring to the somewhat 'lighter' brown colour of the robes of monks of the Franciscan order.

Cappuccino as we write it today is first mentioned in northern Italy in the 1930s, and photographs from that time show a 'viennese' —a coffee topped with whipped cream sprinkled with cinnamon or chocolate. The steamed milk atop is a later addition. Though coffee was brewed differently all over Europe after WW2, in Italy, the real espresso machines became widespread only during the 1950s, and 'cappuccino' was re-defined, now made from espresso and frothed milk (though far from the quality of steamed milk today). As the espresso machines improved, so did the dosing of coffee and the heating of the milk. Outside Italy, 'cappuccino' spread, but was generally made from dark coffee with whipped cream, as it still is in large parts of Europe. The 'Kapuziner' remained unchanged on the Austrian coffee menu, even inTrieste, which by 1920 belonged to Italy and in Budapest, Prague, Bratislava and other cities of the former Empire.

Espresso machines were introduced at the beginning of the 20th century, after Luigi Bezzera of Milan filed the first patent in 1901., and although the first generations of machines certainly did not makeespresso the way we define it today, coffee making in Cafés changed in the first decades of the 20th century. These first machines made it possible to serve coffee 'espresso' -specifically to each customer. The cups were still the same size, and the dose of beans were ground coarse as before. The too high temperature of the boilers scalded the coffee and several attempts at improving this came in the years after the 1st World War. By the end of the 2nd World War, the Italians launched the 'age of crèma' as the new coffee machines could create a higher pressure, leading to a finer grind and the now classic 'crèma'. The first small cups appear in the 1950s, and the machines could by now also heat milk. The modern 'cappuccino' was born. In Vienna, the espresso bars were introduced in the 1950s, leading to both the 'kapuziner' and the 'cappuccino' being served as two different beverages alongside each other.

In the United Kingdom, espresso coffee initially gained popularity in the form of the cappuccino, influenced by the British custom of drinking coffee with milk, the desire for a longer drink to preserve the café as a destination, and the exotic texture of the beverage 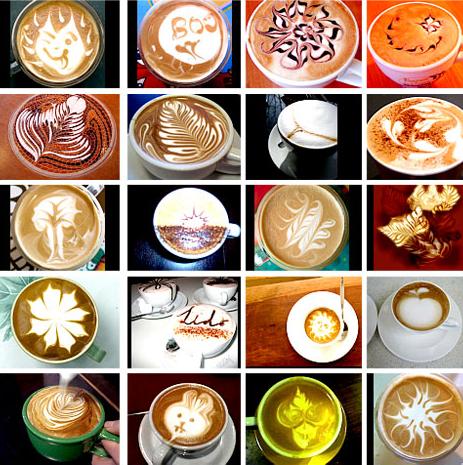 The way the cappuccino is defined today, in addition to a shot of espresso a most important factor in preparing a cappuccino is the texture and temperature of the milk. When a barista steams the milk for a cappuccino, microfoam is created by introducing very tiny bubbles of air into the milk, giving the milk a velvety texture. The traditional cappuccino consists of an espresso, on which the barista pours the hot foamed milk, resulting in a 2 cm (¾ inch) thick milk foam on top. Variations of the mixtures are usually called cappuccino chiaro (light cappuccino, also known as a "wet cappuccino") with more milk than normal, andcappuccino scuro (dark cappuccino, also known as a "dry cappuccino") with less steamed milk than normal.

Attaining the correct ratio of foam requires close attention while steaming the milk, thus making the cappuccino one of the most difficult espresso-based beverages to make properly. A skilled barista may obtain artistic shapes while pouring the milk on the top of the espresso coffee

Cappuccino was traditionally a taste largely appreciated in Europe, Australia, South America and some of North America. By the mid-1990s cappuccino was made much more widely available to North Americans, as upscale coffee houses sprang up.

In Italy, and throughout continental Europe, cappuccino was traditionally consumed early in the day as part of the breakfast, with some kind of sweet pastry. Generally, Europeans did not drink cappuccino with meals other than breakfast, preferring espresso throughout the day and following dinner. However, in recent years Europeans have started to drink cappuccino throughout the entire day. Especially in western-Europe (The UK, Ireland, The Netherlands, Germany, Belgium, France and Spain) cappuccino is popular at cafés and terraces during the afternoon and in restaurants after dinner. In the United States, cappuccinos have become popular concurrent with the boom in the American coffee industry through the late 1990s and early 2000s, especially in the urban Pacific Northwest 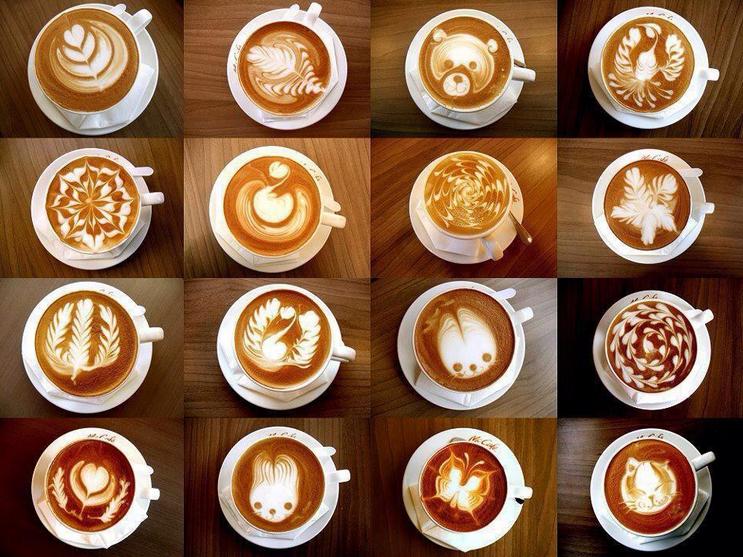