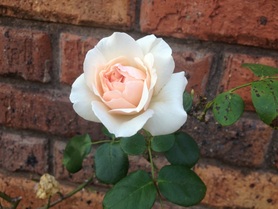 Tomatillos are also called "tomate verde" in Mexico (which means green tomato) and are considered a staple in Mexican cooking. Tomatillo is a member of the nightshade family, related to tomatoes. It now grows everywhere in the Western Hemisphere and is common in Texas gardens.

The fruit of the tomatillo is green and about the size of a large cherry tomato. The inside is white and meatier than a tomato. They grow to maturity inside of a husk. They can range in size from about an inch in diameter to the size of apricots. They are covered by a papery husk which may range from the pale green color of the fruit itself to a light grocery-bag brown. The husks are inedible and should be removed before use.

When growing your own, they are ripe when the tomatillo fills out its papery husk but are still green in color. If they turn yellow, they are still useable but at this stage loose much of their tangy flavor.

The plants will grow to a height of 3 to 4 feet. They are generally available from May through November and are drought tolerant.

Some people will let them ripen until they are yellow-white; some even turn purple (the skin at least). The flavor of the fully ripe tomatillo is very sweet and adds an unusual taste to salsas. 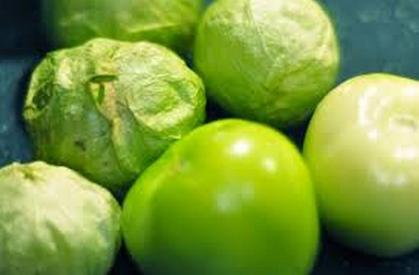 Purchasing Tomatillos:
Choose small tomatillos. They are sweeter than the larger, golf-ball-size ones.
The condition of the "husk" is a good indication of the freshness of the fruit. The husk should be light brown and fresh looking (not shriveled and dried).
Unlike tomatoes, tomatillos should be firm and free of defects.

Storing Tomatillos:
If you are not going to use them immediately, leave the husks intact, wrapped around the fruit like little paper bags.
Either store on the counter or in the refrigerator. They should never be stored in air-tight containers.
They will keep well for several weeks to a month. They may also be frozen whole or sliced.

Preparing Tomatillos:
Remove the husks before using, the husks are inedible. Tomatillos are very easy to cook with because they don't need to be peeled or seeded. Their texture is firm when raw, but soften when cooked. When growing your own fresh tomatillos, they are ready to harvest when the husks burst.
Rinse before using as the tomatillo is covered by a sticky substance. Do not peel the green skin.

Cooking Tomatillos:
Tomatillos can by very inconsistent in flavor, with some being sour and others tasting mild and sweet. If the tomatillos are to tart for your taste, try adding a little sugar to balance the taste.
Raw - Raw or uncooked tomatillos are often in Mexican sauces. They add a fresh citrus-like flavor.
Blanching - Blanching mellows the flavor. Bring a large pot of water to a boil. Add the whole tomatillos (husks removed and rinsed) and boil for approximately 5 minutes or until soft. Drain and crush or puree as directed in your recipe.
Fire Roasting - Roast under the broiler, with a propane torch, or over an open flame such as a grill. Make sure the heat is quite hot before roasting. If the heat is not hot enough, the tomatillos wil turn mushy before being charred. The charred or slightly blackened skins will enrich your sauces with a smoky flavor.
Dry Roasting - This will produce an earthy, nutty flavor. Place the tomatillos in a heavy fry pan (preferably a cast iron pan). Turn heat to low and roast for approximately 20 to 30 minutes, turning occasionally. 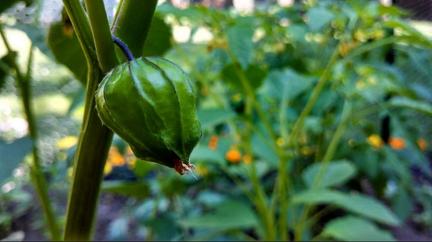 there are some plants damaged by heat - you can not do anything about it anymore - just part of the leaves turn dry and brown, let's hope the new greens will appear soon ... i also love my birch tree that survived and was grown from one lonely seed - the only child of three killed dead russian silver birch trees - damaged by next door renovations and builders... I understand they had to do their thing - not their falt but i am glad there is one that survived.. I am planning to plant an oak tree too following Rachel's idea - i already collected the acorns - and a maple tree - the seeds are there ready to plant - all from our next door neighbours trees...  (also meet new plant for our garden that arrived from Germany - a present for Alex from his friend-poetess - TOMATILLO (the plant not the girl)!!! serious... with small yellow flowers and it is not tomato nor it is armadillo):
Displaying page: Good Advice Magazine >> Home and Garden >> Garden and Outdoor... >> 17
Garden and Outdoor Living Ideas other articles:   17  16  15  14  ... 09  08  07  06  05  04  03  02  01