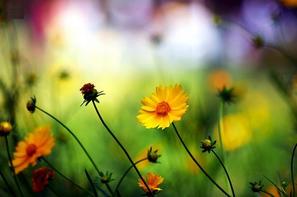 10 Most Breathtaking Gardens of  the World

The Garden of Cosmic Speculation – Scotland
Open to the public only one day a year, the Garden of Cosmic Speculation takes science and maths as its inspiration. Quite simply, there isn't another garden like it in the world. The garden was set up by Charles Jencks, together with his late wife Maggie Keswick and is located at Portrack House near Dumfries. That's in Scotland, by the way! It was set up in 1989 without the usual ideas people have when they create a garden. Horticultural displays very much take second place in this garden. Instead, it is designed with ideas in mind - and to provoke thought (or at least speculation) about the very nature of things

Keukenhof Gardens – The Netherlands
An unprecedented wealth of spectacular floral displays planted in endless varieties, alternated with beautiful works of art. Keukenhof is unique, world famous and has been one of the most popular destinations in the Netherlands. The garden is home to 7 million tulips, which includes special hybrids that have been or are being developed. In fact, Keukenhof's pride and joy is the truly awe-inspiring Russian black tulip Baba Yaga.

Suan Nong Nooch – Thailand
This incredible park is situated in Pattaya, Thailand. It is popular among tourists because of stunningly beautiful landscapes and marvellous views. Everything there seems to be from a fairy-tale. It is full of Thai style houses, villas, banquet halls, restaurants and swimming pools. A vast 600 acres area was bought by Mr. Pisit and Mrs. Nongnooch in 1954, this land was predicted to be a fruit plantation, but, Mrs. Nongnooch made a trip abroad and came back with a firm decision to create there a tropical garden of ornamental plants and flowers.

In 1980 it was opened to the public and got an official name "Suan Nong Nooch." Suan means "garden," since it is a place where everybody concerned can get acquainted with Thai Culture and Cultural Shows. More than 2,000 visitors go there everyday. This garden always looks as it does today. Also, it is a conservation place for many plants and palms.

Versailles – France
Probably the world's most famous garden, it was built for Louis XIV and designed by Andre Le Notre. The laying out of the gardens required enormous work. Vast amounts of earth had to be shifted to lay out the flower beds, the Orangerie, the fountains and the Canal, where previously only woods, grasslands and marshes were. The earth was transported in wheelbarrows, the trees were conveyed by cart from all the provinces of France and thousands of men, sometimes whole regiments, took part in this vast enterprise.

Jardim Botânico de Curitiba – Brazil
Also known as the "Jardim Botânico Fanchette Rischbieter," the Botanical Garden of Curitiba is a garden located in the city of Curitiba, the capital of the state of Paraná, and the biggest city in southern Brazil. It is the major tourist attraction of the city, and it houses part of the campus of the Federal University of Paraná. Opened in 1991, Curitiba's trademark botanical garden was created in the style of French gardens. Once at the portal of entry, extensive gardens in the French style in the midst of fountains may be seen, as well as waterfalls and lakes, and the main greenhouse of 458 square meters, which shelters in its interior, copies of characteristic plants from tropical regions. It rolls out its carpet of flowers to the visitor's right at the entrance. This garden occupies 240.000 m² in area. The principal greenhouse, in an art nouveau style with a modern metallic structure, resembles the mid-19th century Crystal Palace in London. The Botanic Museum, which provides a national reference collection of native flora, attracts researchers from all over the world. It includes many botanic species from the moist Atlantic Forests of eastern Brazil.

Yuyuan Garden – China
Yuyuan Garden is believed to be built in the Ming Dynasty more than 400 years ago. Built in traditional Chinese style with numerous rock and tree garden areas, ponds, dragon-lined walls and numerous doorways and zigzagging bridges separating the various garden areas and pavilions. In the past over 400 years, Yuyuan was restored and reopened several times. Because of the downfall of the Pan's family after Pan Yunduan's death, Yuyuan was slowly out of use and was once in a mess. Although later the garden was renovated by the local rich people, several civil wars in the mid-19th century caused huge damage. In 1956, after Shanghai's liberation, the city government rebuilt the garden and recovered its elegance and beauty. Yuyuan Garden was at last reopened to the public in 1961.

Shalimar Garden – Pakistan
The Shalimar Garden is a Persian garden and it was built by the Mughal emperor Shah Jahan in Lahore, modern day Pakistan. Construction began in 1641 A.D. (1051 A.H.) and was completed the following year. The project management was carried out under the superintendence of Khalilullah Khan, a noble of Shah Jahan's court, in cooperation with Ali Mardan Khan and Mulla Alaul Maulk Tuni. The Shalimar Garden is laid out in the form of an oblong parallelogram, surrounded by a high brick wall, which is famous for its intricate fretwork. The gardens measure 658 meters north to south and 258 meters east to west. In 1981, Shalimar Gardens was included as a UNESCO World Heritage Site along with the Lahore Fort, under the UNESCO Convention concerning the protection of the world's cultural and natural heritage sites in 1972

Minneapolis Sculpture Garden – Minnesota, US
The Minneapolis Sculpture Garden is one of Minnesota's crown jewels and its centerpiece, the Spoonbridge and Cherry, has become a Minnesota icon. Claes Oldenburg best known for his ingenious, oversized renditions of ordinary objects, and Coosje van Bruggen, his wife and collaborator, had already created a number of large-scale public sculptures, including the Batcolumn in Chicago, when they were asked to design a fountain-sculpture for the planned Minneapolis Sculpture Garden. The spoon had appeared as a motif in a number of Oldenburg's drawings and plans over the years, inspired by a novelty item (a spoon resting on a glob of fake chocolate) he had acquired in 1962. Eventually the utensil emerged--in humorously gigantic scale--as the theme of the Minneapolis project. Van Bruggen contributed the cherry as a playful reference to the Garden's formal geometry, which reminded her of Versailles and the exaggerated dining etiquette Louis XIV imposed there.

Ryōan-ji – Japan
Ryoan-ji Temple - Ryoan-ji Temple in Kyoto is famous for its Zen garden. Ryoan-ji Temple is considered to be one of the most notable examples of the "dry-landscape" style. Some say Ryoan-ji Temple garden is the quintessence of Zen art, and perhaps the single greatest masterpiece of Japanese culture. This Japanese temple is surrounded by low walls, an austere arrangement of fifteen rocks sits on a bed of white gravel. No one knows who laid out this simple garden, or precisely when, but it is today as it was yesterday, and tomorrow it will be as it is today. Behind the simple temple that overlooks the rock garden is a stone washbasin called Tsukubai said to have been contributed by Tokugawa Mitsukuni in the 17th century. It bears a simple but profound four-character inscription: "I learn only to be contented."
Displaying page: Good Advice Magazine >> Home and Garden >> Garden and Outdoor... >> 01
Garden and Outdoor Living Ideas other articles:   <<  14  13  12  11  10  09  08  07  06  05  04  03  02  01