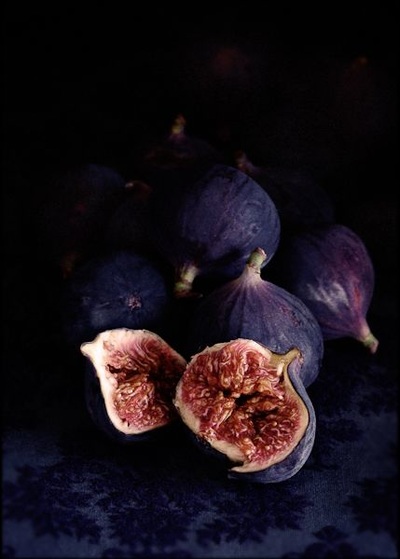 10/06/16
FIGS
Although dried figs are available throughout the year, there is nothing like the unique taste and texture of fresh figs. They are lusciously sweet with a texture that combines the chewiness of their flesh, the smoothness of their skin, and the crunchiness of their seeds. California figs are available from June through September; some European varieties are available through autumn.
Figs grow on the Ficus tree (Ficus carica), which is a member of the Mulberry family. They are unique in that they have an opening, called the "ostiole" or "eye," which is not connected to the tree, but which helps the fruit's development by increasing its communication with the environment. Figs range dramatically in color and subtly in texture depending upon the variety. The majority of figs are dried, either by exposure to sunlight or through an artificial process, creating a sweet and nutritious dried fruit that can be enjoyed throughout the year. 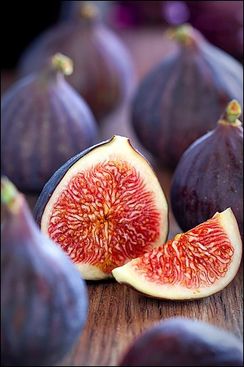 Health BenefitsHelp Lower High Blood PressureFigs are a good source of potassium, a mineral that helps to control blood pressure. Since many people not only do not eat enough fruits and vegetables, but do consume high amounts of sodium as salt is frequently added to processed foods, they may be deficient in potassium. Low intake of potassium-rich foods, especially when coupled with a high intake of sodium, can lead to hypertension. In the Dietary Approaches to Stop Hypertension (DASH) study, one group ate servings of fruits and vegetables in place of snacks and sweets, and also ate low-fat dairy food. This diet delivered more potassium, magnesium and calcium. Another group ate a "usual" diet low in fruits and vegetables with a fat content like that found in the average American Diet. After eight weeks, the group that ate the enhanced diet lowered their blood pressure by an average of 5.5 points (systolic) over 3.0 points (diastolic).
A Sweet Way to Lose WeightFigs are a good source of dietary fiber. Fiber and fiber-rich foods may have a positive effect on weight management. In one study, women who increased their fiber intake with supplements significantly decreased their energy intake, yet their hunger and satiety scores did not change. Figs, like other high fiber foods, may be helpful in a weight management program.
Fruit and Cereal Fiber Protective against Postmenopausal Breast CancerResults of a prospective study involving 51,823 postmenopausal women for an average of 8.3 years showed a 34% reduction in breast cancer risk for those consuming the most fruit fiber compared to those consuming the least. In addition, in the subgroup of women who had ever used hormone replacement, those consuming the most fiber, especially cereal fiber, had a 50% reduction in their risk of breast cancer compared to those consuming the least. Fruits richest in fiber include apples, dates, figs, pears and prunes. When choosing a high fiber cereal, look for whole grain cereals as they supply the most bran (a mere 1/3rd cup of bran contains about 14 grams of fiber). 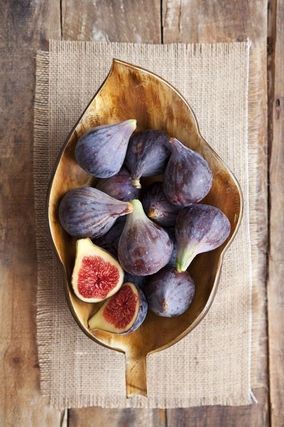 An Insulin-Lowering Leaf in DiabetesYou probably do not think about the leaves of the fig tree as one of fig's edible parts. But in some cultures, fig leaves are a common part of the menu, and for good reason. The leaves of the fig have repeatedly been shown to have antidiabetic properties and can actually reduce the amount of insulin needed by persons with diabetes who require insulin injections. In one study, a liquid extract made from fig leaves was simply added to the breakfast of insulin-dependent diabetic subjects in order to produce this insulin-lowering effect.
Cardiovascular EffectsIn animal studies, fig leaves have been shown to lower levels of triglycerides (a form in which fats circulate in the bloodstream), while in in vitro studies, fig leaves inhibited the growth of certain types of cancer cells. Researchers have not yet determined exactly which substances in fig leaves are responsible for these remarkable healing effects.
Besides their potassium and fiber content, figs emerged from our food ranking system as a good source of the trace mineral manganese.
Protection against Macular DegenerationYour mother may have told you carrots would keep your eyes bright as a child, but as an adult, it looks like fruit is even more important for keeping your sight. Data reported in a study published in the Archives of Ophthalmology indicates that eating 3 or more servings of fruit per day may lower your risk of age-related macular degeneration (ARMD), the primary cause of vision loss in older adults, by 36%, compared to persons who consume less than 1.5 servings of fruit daily.
In this study, which involved over 100,00 women and men, researchers evaluated the effect of study participants' consumption of fruits; vegetables; the antioxidant vitamins A, C, and E; and carotenoids on the development of early ARMD or neovascular ARMD, a more severe form of the illness associated with vision loss. Food intake information was collected periodically for up to 18 years for women and 12 years for men. 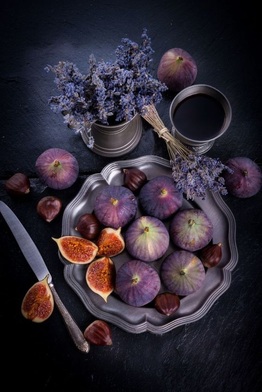 While, surprisingly, intakes of vegetables, antioxidant vitamins and carotenoids were not strongly related to incidence of either form of ARMD, fruit intake was definitely protective against the severe form of this vision-destroying disease. Three servings of fruit may sound like a lot to eat each day, but by simply tossing a banana into your morning smoothie or slicing it over your cereal, topping off a cup of yogurt or green salad with a couple of diced figs, and snacking on an apple, plum, nectarine or pear, you've reached this goal.
Description
Figs are not only the main ingredient in a very popular cookie, the fig bar, but are a culinary delicacy par excellence. Part of the wonder of the fig comes from its unique taste and texture. Figs are lusciously sweet and feature a complex texture that combines the chewiness of their flesh, the smoothness of their skin, and the crunchiness of their seeds. In addition, since fresh figs are so delicate and perishable, some of their mystique comes from their relative rarity. Because of this, the majority of figs are dried, either by exposure to sunlight or through an artificial process, creating a sweet and nutritious dried fruit that can be enjoyed throughout the year.
Figs grow on the Ficus tree (Ficus carica), which is a member of the Mulberry family. They are unique in that they have an opening, called the "ostiole" or "eye," which is not connected to the tree, but which helps the fruit's development, aiding it in communication with the environment.
Figs range dramatically in color and subtly in texture depending upon the variety, of which there are more than one hundred and fifty. Some of the most popular varieties are: 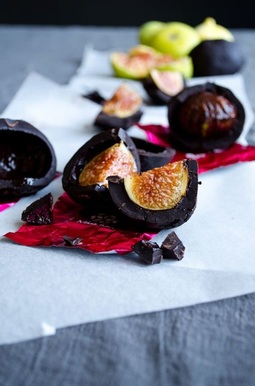 History
Figs can trace their history back to the earliest of times with mentions in the Bible and other ancient writings. They are thought to have been first cultivated in Egypt. They spread to ancient Crete and then subsequently, around the 9th century BC, to ancient Greece, where they became a staple foodstuff in the traditional diet. Figs were held in such esteem by the Greeks that they created laws forbidding the export of the best quality figs. Figs were also revered in ancient Rome where they were thought of as a sacred fruit. According to Roman myth, the wolf that nurtured the twin founders of Rome, Romulus and Remus, rested under a fig tree. During this period of history, at least 29 varieties of figs were already known.
Figs were later introduced to other regions of the Mediterranean by ancient conquerors and then brought to the Western Hemisphere by the Spaniards in the early 16th century. In the late 19th century, when Spanish missionaries established the mission in San Diego, California, they also planted fig trees. These figs turned out to be inferior in quality to those that were imported from Europe, and it wasn't until the development of further cultivation techniques in the early 20th century that California began focused cultivation and processing of figs. Today, California remains one of the largest producers of figs in addition to Turkey, Greece, Portugal and Spain.
How to Select and Store
Since fresh figs are one of the most perishable fruits, they should be purchased only a day or two in advance of when you are planning on eating them. Look for figs that have a rich, deep color and are plump and tender, but not mushy. They should have firm stems and be free of bruises. Smelling figs can also give you clues into their freshness and taste. They should have a mildly sweet fragrance and should not smell sour, which is an indication that they may be spoiled.
For the most antioxidants, choose fully ripened figs:
Research conducted at the University of Innsbruck in Austria suggests that as fruits fully ripen, almost to the point of spoilage, their antioxidant levels actually increase.
Key to the process is the change in color that occurs as fruits ripen, a similar process to that seen in the fall when leaves turn from green to red to yellow to brown—a color change caused by the breakdown and disappearance of chlorophyll, which gives leaves and fruits their green color. 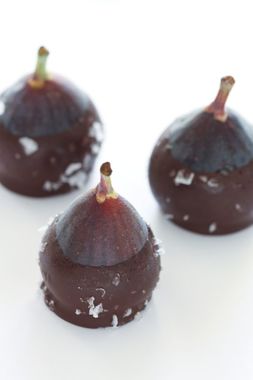 California figs are available from June through September with the exact timing varying with the variety. Some European figs are often available throughout autumn. When purchasing dried figs, make sure that they are still relatively soft, free of mold, and have a mellow, pleasant smell. Dried figs are available throughout the year.
Ripe figs should be kept in the refrigerator where they will stay fresh for about two days. Since they have a delicate nature and can easily bruise, you should store them either arranged on a paper towel-lined plate or shallow container. They should be covered or wrapped in order to ensure that they do not dry out, get crushed or pick up odors from neighboring foods. If you have purchased slightly under-ripe figs, you should keep them on a plate, at room temperature, away from direct sunlight. Dried figs will stay fresh for several months and can either be kept in a cool, dark place or stored in the refrigerator. They should be well wrapped so that they are not over exposed to air that may cause them to become hard or dry.
Tips for Preparing and Cooking
Tips for Preparing Figs
Before eating or cooking figs, wash them under cool water and then gently remove the stem. Gently wipe dry.
Dried figs can simply be eaten, used in a recipe as is, or simmered for several minutes in water or fruit juice to make them plumper and juicier.
How to Enjoy
A Few Quick Serving Ideas
When preparing oatmeal or any other whole grain breakfast porridge, add some dried or fresh figs.
Poach figs in juice or red wine and serve with yogurt or frozen desserts.
Add quartered figs to a salad of fennel, arugula and shaved Parmesan cheese.
Fresh figs stuffed with goat cheese and chopped almonds can be served as hors d'oeuvres or desserts. 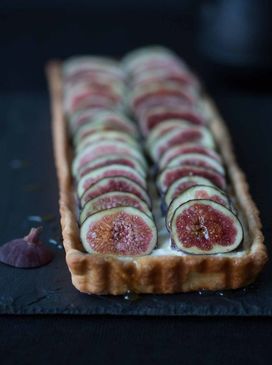 Individual Concerns
Dried Figs and Sulfites
Commercially grown dried figs may be treated with sulfur dioxide gas during processing. They may also be treated with sulfites to extend their shelf life.
Sulfur-containing compounds are often added to dried foods like figs as preservatives to help prevent oxidation and bleaching of colors. The sulfites used to help preserve dried figs cause adverse reactions in an estimated one out of every 100 people, who turn out to be sulfite sensitive.
Sulfite reactions can be particularly acute in people who suffer from asthma. The Federal Food and Drug Administration estimates that 5 percent of asthmatics may suffer a reaction when exposed to sulfites.
Foods that are classified as "organic" do not contain sulfites since federal regulations prohibit the use of these preservatives in organically grown or produced foods. Therefore, concern about sulfite exposure is yet another reason to purchase organic foods.
Nutritional Profile
Figs are a good source of dietary fiber, vitamin B6, copper, potassium, manganese, and pantothenic acid. 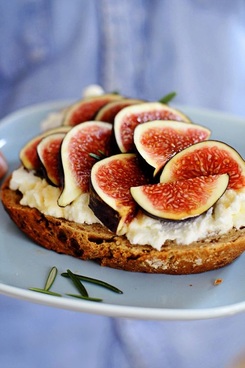