DANCE IS THE HIDDEN LANGUAGE OF THE SOUL 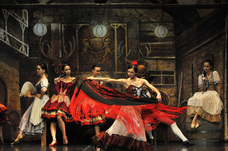 The Imperial Russian Ballet’s production of Don Quixote will be a night to remember.Hailed by theatregoers in New Zealand as "one of the best ballets they have seen” this full production of one of the repertoire’s timeless classics sees more than 40 dancers at the height of their powers perform a story backed with romance, derring do and high comedy. Don Quixote was written by Spaniard Miguel de Cervantes and published in two volumes in 1605 and 1615. It is considered one of the most influential work of literature, and its impact is still felt today: many of us use the word `"Quixotic" or the phrase "tilting at windmills", based on a wildly funny scene in the book, even if we don’t know their source. The ballet tells the story of Alonso Quijano, an ageing Spanish nobleman who reads so many novels on chivalry, romance, princesses and knights, that he starts to lose touch with reality. He takes it upon himself to revive chivalry under the name Don Quixote, so chosen because it rhymes with Lanzarote (Lancelot), one of the more famous Knights from history. As Don Quixote, Alonso imagines himself as a brave Knight in search of the lady of his dreams, Dulcinea, a local farm girl he had once loved. Accompanied by a simple peasant farmer – his faithful squire Sancho Panza - Don Quixote sets off on their adventures. Along the way he leads a charge against imaginary enemies, he fights castles thinking they are giants, he pays homage to gypsy kings and takes part in castle festivities. The Moscow-based Imperial Russian Ballet Company is highly regarded world-wide for its interpretations of classic masterpieces. Its version of Don Quixote proudly follows in this tradition, and is a must-see event for lovers of dance, theatre and spectacle. The Imperial Russian Ballet was formed in 1994 by the Bolshoi Theatre soloist, Gediminas Taranda. They have staged classic masterpieces in the Tchaikovsky Concert Hall and the Mossovet Theatre. The home venue for the troupe when they perform in Moscow is now the Kolobov Novaya Opera Theatre.

for tickets booking and tour dates
Our friends at The Imperial Russian Ballet would love to swap some tickets in exchange for some promotion through our club and they are happy to give us 10 tickets (5 double passes) to use as giveaways this year. The total value of this giveaway is around $1000.00

LIVING IN THE FAIRY TALE NEW

Disney On Ice presents Treasure Trove is coming to Hisense Arena, Melbourne from 3-7 July and will take audiences on a magical journey spanning 50 years of Disney animated film. From the inaugural Snow White and the Seven Dwarfs, to the 50th film – Tangled, this ice skating extravaganza commemorates the legacy of Disney films with an all-new medley of Disney tales that will captivate audiences

Get lost with Rapunzel and Flynn and enter the worlds of your other favourite Disney princesses - Cinderella,Jasmine, Ariel, Sleeping Beauty, Belle and Snow White.  Set sail with Peter Pan, the always playful Tinker Bell and the cunning Captain Hook and his crew as they head on an adventure beyond Never Land!  Trek through the wilderness and wildlife of Africa with Simba, Nala, Pumbaa and Timon as they discover the true meaning of the ‘Circle of Life.’  Embark on a mischievous ride with Woody, Jessie and Buzz Lightyear from Disney Pixar’s Toy Storyand explore the mystical and marvelous Wonderland with Alice and the Mad Hatter. Disney On Ice presentsTreasure Trove will take Australian audiences on the journey of a lifetime.

Purchase tickets from Ticketek: 132 849 or www.ticketek.com.au/disneyonice.
Tickets start from just $29.50.
Additional discounts apply.
VIDEO FOOTAGE
Our friends who manage the event marketing and publicity offer Bohemian Rhapsody Club 12 tickets (in lots of 4) for theSunday 6th July, 5pm performance ($120 value each). The tickets will be raffled for our VIP members exclusively (you need to have a valid membership card to be in the draw!). For your chance to win one of three prize packs please reply first to the email that I will send out shortly. The total value of this giveaway is around $360.00