IT IS OUR ILLUSIONS THAT CREATE THE WORLD... NEW 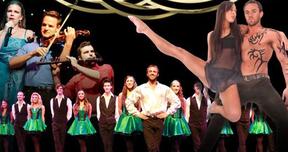 CELTIC ILLUSION BY EUREKA ENTERTAINMENT
Don't miss this brand new Irish dance spectacular featuring grand illusions for the first time ever!
Tour Dates
Celtic Illusion
Saturday 14 April 2012 8:00PM
On Sale Now!
Ticket pricing at:
The Palms at Crown
Book at Tiketek!
1300 795 012
Irish dance has come a long way since the premier of such shows as Riverdance and Lord of the Dance. Now be prepared as irish dance is taken to the next level in this world first dance phenomenon. Anthony Street, former principal dancer from Michael Flatleys Lord of the Dance and magician, will fuse magic and dance together in this never seen before stage spectacular.

Embark on a journey of magic and amazement as you witness breathtaking illusions amongst modern irish dance performed by a cast of champion dancers. With a blend of modern celtic music composed By Angela Little (Baz Luhrmanns \'Australia\') and flawless choreography, this show is absolutely unmissable. These international professionals will take your breath away whilst they share with you their perfected craft. This is entertainment at its best. Click our tour dates and find out where the nearest show is, and book now before tickets disappear!

Melbourne born Anthony Street started Irish dancing at the age of 14 after seeing riverdance for the first time. Street is the first Australian to perform both leading roles in the world's greatest dance show Lord of the Dance, including the very role Michael Flatley played himself. Since then he has toured over more than 20 countries including his home country Australia.
Eureka Entertainment is kindly offering Bohemian Rhapsody Club a number of tickets to this show that will be raffeled through a competition between our VIP members.Please stay tuned for details...
Winners: n/a
100413
Displaying page: Hot Announcements >> Illusion (Magic shows)
Hot Announcements some categories: NEW Ads  *  Art  *  Beauty  *  Coffee  *  Entertainment  *  Food and Snacks  *  Gifts
Health Products  *  Movies  *  Music and Vocal  *   Places of Interest  *  Private Ads  *  Tea  *  Theater  *  Wine and Beer