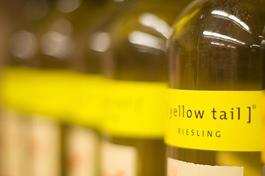 Wine of The Latroun (Latrun) Monastery (לטרון‎ in Hebrew)
I thought that one day the truth should come out... so the time has come...

We worked in Israel in 1997 for one of the IT companies. As you may know one fourth of Israel population is ex-Russian residents. They are everywhere especially in IT industry. One of our Russian friends we worked with, let's call him for example...hm-m-m-m... Sergei N, told us that there is a very nice place that we need to check out when we hire a car to investigate the rural places around Tel-Aviv. The place is called Latroun Monastery. It is famous for its tasty grape juice, vegetables, good wine and olive oil it produces, which are available from a small shop run by the monks. Sergei kindly volunteered to guide us there. I will tell you more about the place.

How to get there:
Very easy. It is located 25 kilometers west of Jerusalem and 14 kilometers southeast of Ramla.The Latrun Monastery can be seen from the road number 1 (Jerusalem – Tel Aviv road). If you drive from Tel-Aviv, you should take a right at the Latrun Interchange to enter road. Drive about 200 meters south and take a left in the intersection, to enter the Monastery Area. 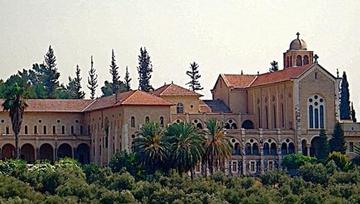 The monastery garden is very beautiful and so is the outside area surrounded by olive trees. Also in the garden, there is a collection of archaeological finds from the area.

The Monastery was established in 1890 by the French Trappist Order. It is located on a rise with a fabulous view of the Ayalon Valley "where God made the moon stand still". During the First World War, the Turks expelled the monks and destroyed the monastery. The Monks returned in 1927, when they built the present building. The clock tower of the church was completed only in 1954. The church itself is an interesting mixture of Byzantine and Gothic styles.
The monks keep a vow of silence, except for those who sell wine and olive oil to visitors. The name “Latrun” comes from a twelfth-century castle on this spot called La Tour de Chevaliers (“the knights’ tower”). Later travelers believed the name was connected to the Latin word latro (thief) and saw this site as the home of the “good thief” crucified next to Jesus.
Today the winery produces about 300,000 bottles annually including many varieties of Cabernet Sauvignon, Merlot, Pinot Noir and Blanc. Now that your appetite has been wetted its time to stroll through the wine shop to pick out your favorite selection... But before departing the monastery be sure to stop at the “Garden of Brotherhood” near the parking lot to admire the large wooden carving with its inscriptions, which is not unlike a totem pole. 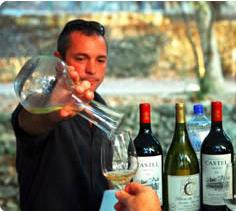 I must tell you - I do not like wine and we drink it rarely. This sweet white Moscato was so light and tender... the aroma was so fine - it was more like a light white grape juice rather than wine. The two bottles that we bought for four of us helped us to survive when our hired car got broken down on the way back home from the Dead Sea and we stood in the middle of the road and in the middle of a desert expecting the cold chilly night. The wine warmed us up and raised the mood that had been spoiled because of the incident... 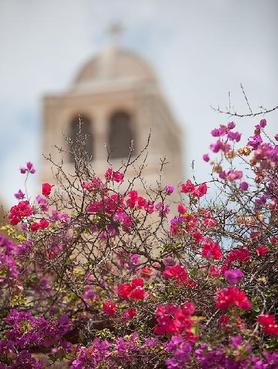 ... and that would not be the end of the story unless I tell you that we had to leave beloved Israel to go back to Australia on 12 of October. 11th of October was a very hot day, and it was Yom Kippur as well, so no cars could be driven - the country was literally dead.

Sergei jumped on his push bike and was riding all the way to Latrun from Tel-Aviv to get us that bottle of Moscato that we will never forget. No one knows how he did it - as it was a long trip on a hot day... He met few people on his way there and they all thought that he was crazy. Only god knows how he got there... That bottle went with us all the way to Melbourne and was opened together with our friends...