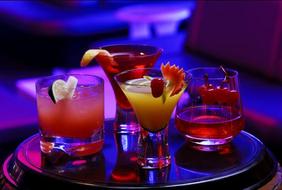 Traditional drinks from around the world

Kvas has been consumed in most Slavic countries (Russia, Belarus, Ukraine, Lithuania, Poland) as well as in ex-Soviet states since ancient times. In some countries one can still see kvas vendors on the streets. Similar beverages around the world include Malta, Chicha, Ibwatu, Pulque and Rivella. There is a famous saying "Bad kvas is better than good water."

House kvas is made with rye bread baked into sukhari (croutons), yeast and zakvaska (kvas fermentation starter). The taste depends on the proportions of these essential ingredients. There are numerous variations of the following basic recipe and every house has it's own recipe.
Directions 1. If desired, rub rims of margarita glasses with lime wedge; dip rims into a shallow dish of coarse salt or sugar and shake off excess. Set aside.
2. In a blender, combine limeade concentrate, orange juice, and grapefruit juice. Cover and blend until smooth. With the blender running, gradually add ice cubes through the hole in the lid, blending until slushy. If desired, tint with a few drops of green food coloring. Pour into margarita glasses. If desired, garnish with citrus slices. Makes 8 servings.
The slogan of the Almdudler advertising campaign, in the Austro-Bavarian dialect, has become a well known phrase in Austria: Wenn de kan Oimdudla haum, geh' i wieda ham! (Standard German: Wenn die keinen Almdudler haben, gehe ich wieder heim! English: If they don’t have Almdudler, I'll go back home!) This advertising slogan was written by advertising creative legend and Englishman Simon North while in Austria.
To be continued...
Displaying page: Good Advice Magazine >> Food and Drinks >> Wine and Drinks >> 10
Wine and Drinks other articles: <<  18  17  16  15  14  13  12  11  10  09  08  07  06  05  04  03  02  01