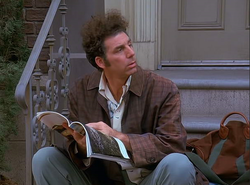 Despite the failure of the majority of his schemes and his unwillingness to even apply for a normal job, Kramer always seems to have money when he needs it. In the episode, "The Shoes", Jerry remarks that Kramer received a "ton of money" at some earlier point in his life (presumably via inheritance). In "The Visa", George makes a comment about Kramer going to a fantasy camp, and how Kramer's "whole life is a fantasy camp. People should plunk down two thousand dollars to live like him for a week. Do nothing, fall ass-backwards into money, mooch food off your neighbours, and have sex without dating. That's a fantasy camp." The biggest example of this demonstrated on the show was in the episode "The Subway", in which Kramer places a $600 bet on a horse at 30-to-1 odds, which amounts to winning $18,000.

The only steady jobs Kramer is known to have had was in "The Strike", when he went back to work at H&H Bagels after being on strike for over a decade. His union finally settled the strike when the minimum wage of New York was raised to the hourly rate Kramer had been demanding from his employer (Kramer still felt the strike was a success), and he was re-employed. He only worked there during that one episode before he was fired. During the time he was working at the bagel shop, he went on strike again because of having to work during Festivus, a holiday celebrated by Frank Costanza. He also was a lifeguard one summer. (Shaved his chest hair.) Kramer is engaged in a variety of short-lived jobs. He works part-time as a department store Santa before being fired for spreading Communist propaganda to young children in "The Race".

In "The Bizarro Jerry", he works at an office where he is not actually employed, describing his daily activities to Jerry as "T.C.B. You know, takin' care of business." His "boss" eventually "fires" him, commenting that his reports resemble work by someone with "no business training at all." In "The Beard", he is paid to be a decoy in a police lineup. A story arc of the fifth season includes Kramer's idea for a coffee table book about coffee tables, which is eventually published in "The Fire". His success in that particular endeavor is short-lived, however, because he spews coffee all over Kathie Lee Gifford while promoting the book on Live with Regis and Kathie Lee in "The Opposite". In "The Pick", he becomes an underwear model for Calvin Klein, which must account for at least some of his income. The biggest boost to Kramer's income would have to be in the episode "The Wizard" when his coffee table book is optioned for a movie by a "big Hollywood so-and-so", earning Kramer enough royalty money to retire to Florida (although he moves back to New York almost immediately after a "political scandal" involving going barefoot in the clubhouse, which costs him the election for condo board president.)
He is a compulsive gambler who successfully avoids gambling for several years until "The Diplomat's Club", in which he bets with a wealthy Texan on the arrival and departure times of flights going into New York's LaGuardia Airport. Before that, "The Pony Remark" and "The Subway" show Kramer as a tough gambler.

A struggling (and terrible) actor, Kramer briefly lives in Los Angeles, where he accosts Fred Savage, appears in a minor role on Murphy Brown, and is a suspect in a string of serial killings ("The Keys", "The Trip"). Back in New York, Kramer works as a stand-in on a soap opera with his friend Mickey Abbott in "The Stand In", and is given a one-line part in a Woody Allen movie in "The Alternate Side" (His line, "These pretzels are making me thirsty", becomes the show's first catchphrase), but he is fired before completing his scene. Kramer works in various other theater projects, such as acting out illnesses at a medical school in "The Burning".

In the episode "The Strong Box", Kramer says one of the things in the box is his military discharge. Upon being asked, "You were in the army?", Kramer replies, "Briefly," claiming the reason he was discharged is classified. In the episode "The Muffin Tops", Kramer mentions shaving his chest when he was a lifeguard.

George's job interview:
When Kramer decides to pay off Jerry (for all the food that he took from Jerry in a week) which was $50 he says "I don't have that kind of cash" and he ends up selling his bicycle to Newman to settle Jerry. In "The Calzone", Kramer claims that he only carries change. Possibly Kramer receives money (from whatever the source) in monthly installments, and erratic spending habits leave him well-off one month and short of cash the next.

Kramer is also paid by J. Peterman a small, one time royalty of $750, in the form of a check, for "the whole lot" (all of Kramer's life stories). After being told by Peterman to "name your price, man", Kramer ponders the question for a moment before asking for $1500. Peterman replies "I'll give you half that". Kramer quickly agrees (at which point Peterman writes out and signs the $750 check).