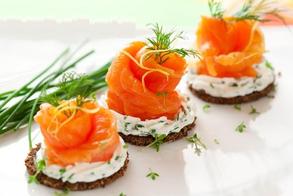 Solyanka is a thick, piquant soup that combines components from schi (cabbage, smetana) and rassolnik (pickle water and cucumbers), spices such as olives, capers, tomatoes, lemons, lemon juice, kvass, salted and pickled mushrooms make up a considerably strong sour-salty base of the soup. Solyanka is much thicker than other soups, about 1/3 less liquid ratio. Three types are distinguished: meat, fish, and simple solyanka. The first two are cooked on strong meat or fish broths, and the last on mushroom or vegetable broth. All the broths are mixed with cucumber pickle water.

There are three basic types of solyanka, with the main ingredient being either meat, fish, or mushrooms. All of them contain pickled cucumbers with brine, and often cabbage, salted mushrooms, smetana (sour cream), and dill. The soup is prepared by cooking the cucumbers with brine before adding the other ingredients to the broth.

Fish solyanka Solyanka is also popular in the former German Democratic Republic (GDR or East Germany), where it is commonly found in restaurants and available in canned form in grocery stores. (The German transliteration is Soljanka.) This practice stems from the era when Soviet troops were stationed in the GDR, and Soljanka was found on the menu at many East German restaurants. 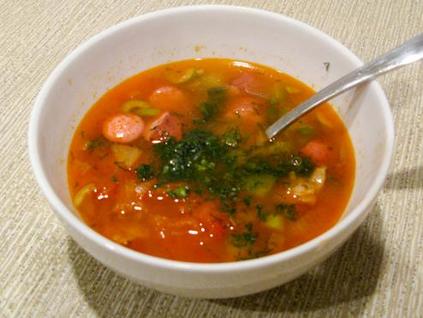 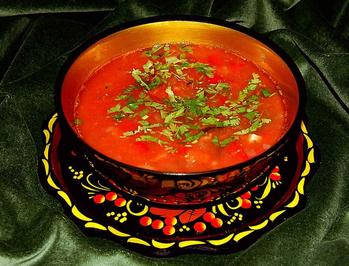 1. Preheat a pan with oil or butter.
2. Cut onion in thin semi rings and stir until transparent, but not browned.
3. Cut pickled cucumbers in strips and add to onions.
4. Add tomato paste and stir until mixed - 2-3 minutes.
5. Add meat chopped into fine pieces (you can actually use any variety of meat you prefer, but above is what I chose to use).
6. Add to Crock pot.
7. Add can of stewed tomatoes and water to just the top of mixture.
8. Cook on high for 4 hours.
9. About 1 hour before serving add olives, mushrooms and capers.
10. Add flour to thicken.
11. Serve with a dollop of sour cream and lemon slice for garnish.

Beef stroganoff is a dish consisting of strips of lean beef sauteed and served in a sour-cream sauce with onions and mushrooms. The recipe, which is of Russian origin, has been known since the eighteenth century, but its name appears to come from County Paul Stroganoff, a nineteeth-century Russian diplomat. Legend has it that when he was stationed in deepest Siberia, his chef discovered that the beef was frozen so solid that it could only be coped with by cutting it into very thin strips. 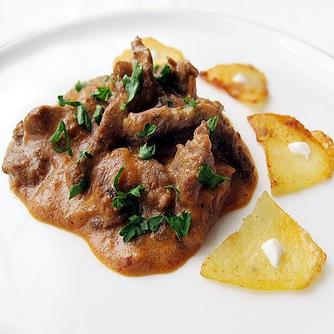 Method:
Chop the meat long wise fibers (fibres) and beat the pieces a little. After that cut the pieces into stripes 2 cm long and 1/2 cm wide. Season and roll them in flour. Fry chopped onion in the pan and when it is gold brown, put the stripes there. Fry on hot heat until the meat is light brown. Make a sauce: fry 1 tb flour pounded with butter for few minutes, add sour cream, ketchup, salt. Pour the sauce over meat and stew on a low heat during 15-20 minutes. Don't let sauce to boil, overwise the meat will be hard. Beef Stroganoff is served with fried potatoes. 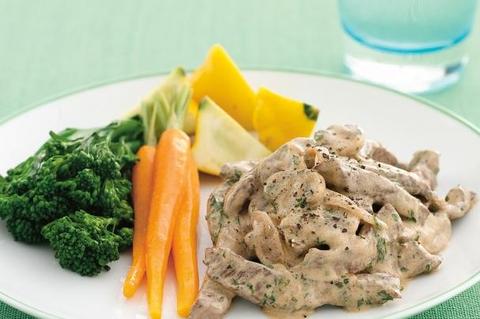 Method:
Beat up eggs with sugar with the mixer until there is foam. Stir in flour very gradually and make dough very quickly. Fill in the form half (the dough wil rise twice) with dough very very carefully. Grease the form abundantly with butter and sprinkle with flour. Close all windows and doors to avoid draughts otherwise "baba" will catch a cold". Put in a warm place, don't move it. As soon as the dough rise up to the top, bake in the oven (180C) until it is golden. It is very important to keep the form of "baba" after baking. Put upside "baba" in the form down on the paper until it is cold. Don't take it out of the form until it is cold. Mix rum with cherry juice in a large bowl and sink "baba" in this syrup. Beat up yolks with cream and starch, pour in rum. Put the mass on a "steam bath" (put a smaller pan with cream mass in a large pan with water) and bring to thickening. Pour the sauce over "Baba" before serving. 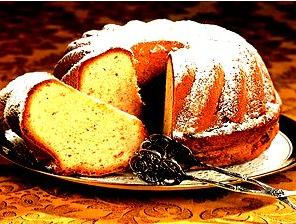 Power peppers! The stuffing in these was off the charts. by Masha M 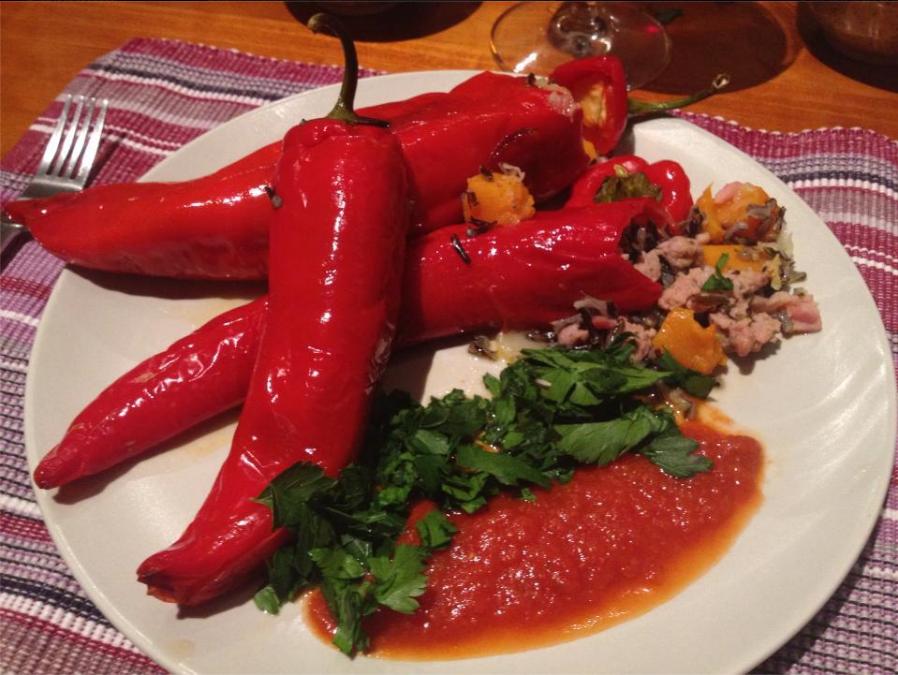