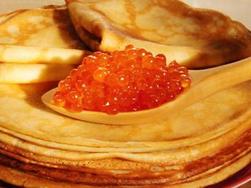 Russian Rassolnik (hot soup).
A Russian proverb says; "U kazhdoij solenshchiny svoy rassol" ("Every pickles have their pickle juice"). This means that it has always required some skills to pickle vegetables and get a quality juice. "Rassol " or pickle juice is a key ingredient of a this true staple of Russian cuisine. Rassolnik is a soup made from pickled cucumbers, pearl barley and pork or beef kidneys. Rassolnik has so many variations (pitersky, moskovsky, troitsky, etc) as pickles vary from household to household. Russians did not only take pickled cucumbers' juice, but also used pears, apples, cabbage or cherries to prepare "rassol". To thicken the soup cereals, specifically barley grits are used.

Cook beef stock separately.
To prepare the kidneys, remove their fat and membrane, cut in half, cover with cold water, and let soak for 6 hours, changing the water every 2 hours. Pour out the last water.

Peel and slice carrots, onion, parsley and celery stalks and saute in fat or butter. Peel the potatoes and cut into cubes. Dice pickles, put them in the already made meet stock and simmer a little. Strain the stock and add diced potatoes, barley grits, sauteed vegetables. Bring to a boil, then reduce heat and simmer for 20 minutes. Add in the pickles and the salt and pepper.

Slice the kidneys and quickly saute them in butter for some 5-6 min and add them to the soup for the last 5 minutes or so. Add pickle juice as well.

When ready to serve, ladle into bowls, then stir in a big tablespoon of sour cream into each bowl and top with fresh chopped dill
Chicken Kiev

Chicken Kiev/Kotleta po Kievski/ Kiev-style chicken cutlet. Simply this meal is pounded chicken breast, rolled around cold garlic butter with herbs breaded and either fried or baked. It necessarily has a chicken shoulder bone in it. There are various versions of this meal background and the Ukrainian origin of the meal is quite questionable. However Chicken Kiev has become trademark of Kiev and is known all over the world. It is served in most world restaurants where it has this name.

One version suggests that the meal has a French origin, its recipe was created by French restaurant-keeper Nicolas Appert who named it cotelettes de volaille. The Russian food historian William Pokhlebkin claimed that Chicken Kiev was invented in the Moscow Merchants' Club in the early 20th century and was renamed Chicken Kiev (kotleta po-kievski) in one of the Soviet restaurants in later years.

It is known however that originally Chicken Kiev was prepared from veal. It was Kiev (name unknown) restaurant-keeper that put the bone inside and rolled meet around butter. The meal had so big success that won fame to its inventor and still remains top popular order of those interested in Ukrainian cuisine.

Wash and dry breasts, remove skin, place smooth side on cutting board, and pound to flatten to about 1 cm thickness. Prepare butter: combine the butter with minced dill, lemon juice and minced lemon peel, salt and pepper. Press garlic through the garlic press and mix in with the butter. Roll into sausage shape and put in a plastic bad in a freezer for 35 minutes. Then wrap the breasts around each piece of butter, creating packets. Dip in flour, shake off excess flour and pat flat in your hand, dip in beaten eggs and roll in breadcrumbs. Refrigerate in a freezer for 15 minutes. Fry in butter until golden brown. To make the original form, put chicken shoulder bone half inside while wrapping 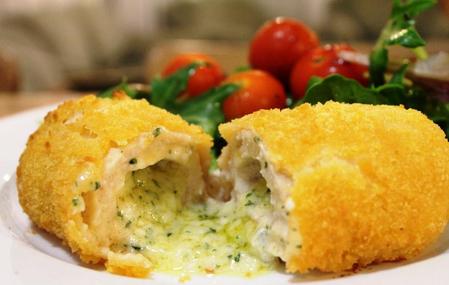 (singular: pirozhok; diminutive of "pirog" [pie]) are small stuffed buns (pies) made of either yeast dough or short pastry. They are filled with one of many different fillings and are either baked (the ancient Slavic method) or shallow-fried (known as "priazhenie", this method was borrowed from the Tatars in the 16th century). One feature of pirozhki that sets them apart from, for example, English pies is that the fillings used are almost invariably fully cooked. The use of chopped hard-boiled eggs in fillings is another interesting feature. Six typical fillings for traditional pirozhki are:


They commonly contain meat (typically beef) or a vegetable filling (mashed potatoes, mushrooms, onions and egg, or cabbage). Pirozhki could also be stuffed with fish (e.g., salmon) or with an oatmeal filling mixed with meat or giblets. Sweet-based fillings could include stewed or fresh fruit (apples, cherries, apricots, chopped lemon, etc.), jam, or cottage cheese; The buns may be plain and stuffed with the filling, or else be made in a free-form style with strips of dough decoratively encasing the filling. Potatoes among American crops became very popular when the vegetable was brought and adopted to the Eurasian climate. Before then, the ingredient was not available as it took more time to acclimatize to continental regions like Russia and Ukraine. Before then, the ingredients would contain more vegetables and fruits, as well as duck, goose and rabbit meat, uncommon today. 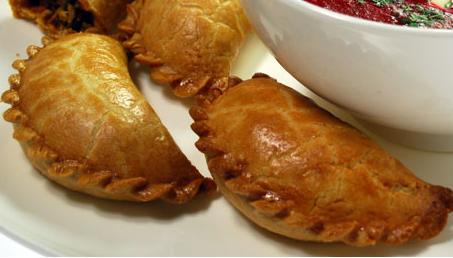 The Balkans
The Greek variety piroski (Greek: πιροσκί) is popular in parts of Greece influenced by eastern cuisine and in most big cities, where they are sold as a type of fast food. The Greek piroski come deep-fried with many different stuffings.

Estonians
too have this tradition. It is not similar at all to pelmeni, and is not reminiscent of a dumpling. The Estonian pirukas is fairly small in size and is always baked in dough. The Estonian version, with regional variations in respect to fillings, compared to the Latvians, is referred to as "pirukad" ("pirukas" in the singular). Pirukad are sometimes accompanied by bouillon. Many recipes exist, with meat, cabbage, carrots, rice, egg and other fillings and filling mixtures also being used. As a rule, the best ones are homemade. The Latvian bacon and onion version is known to Estonians, but is not as common. Here too, one can encounter sweet fillings, although savory "pirukad" predominate.

Central Asia
Pirozhki are common as fast food on the streets of the Central Asian countries in Kazakhstan, Tajikistan, Uzbekistan, Turkmenistan, Kyrgyzstan, where they were introduced by the Russians. They are also made by many Russians and non-Russians at home.

East Asia
Pirozhki is also very common as fast food in Mongolia, and it is made throughout the country by families at home.

Caucasus and Western Asia
The Russian variant of Pirozkhi is a common fast food in Azerbaijan, Armenia and Iran .

Japan
A Japanese version, called ピロシキ (piroshiki), are predominantly fried, use fillings such as ground meat, boiled egg, bean noodles, spring onion etc., and are commonly breaded with panko before frying, in the manner of Japanese menchi-katsu. Another popular variation is filled with Japanese curry and is quite similar to karē-pan, which is itself said to be inspired by pirozhki. 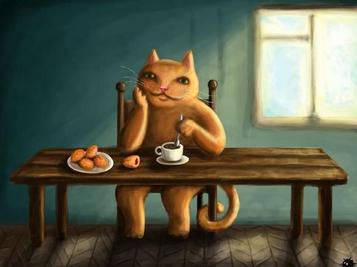