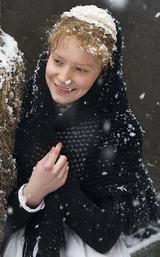 10/02/2012 short reviews by Natasha and Alex M
Albert Nobbs
Done in the best English classical movies traditions, Albert Nobbs is a story about a lonely, strange, emotionless, unhappy and even seemingly mentally challenged woman who works as a male butler at the small Hotel in Dublin and living the life of someone else but not hers. The action takes place in late 19th century. It is an adaptation written by Glenn Close and John Banville of a short story by Irish novelist George Moore, first published in his 1927 collection Celibate Lives. The life of Albert gets transformed when she/he meets another cross dresser who works as a male painter at the same Hotel. The realization comes suddenly, quickly and painfully. The performances are really interesting. We really enjoyed it.
Rate: 10/10

Sherlock Holmes A Game of Shadows
Despite all the bad reviews that we were fed with from the media, press and from our friends IMHO the movie was quite good. From the art perspective - the pictures drawn were fantastic including the color selection (brownish that created that 1890-s feel), the tricks were exciting, and the camera work was 10 out of 10 - always with lots of surprises and unexpected moves. Forgetting it was about Sherlock Holmes and neglecting the classics, we loved the movie as it could have been called anything but the hero of Arthur Conan Doyle detective novels, a little bit over-pretentious world savior and a little bit overestimating himself fighting with the evil professor J Moriarty, always covered in dirt and with bruises he, a "concerned citizen", ecstatic (or psychotic?) looked more like a pirate rather than a detective but it was rather amazing for us - believe it or not! If you like entertaining light movies - this is the one to enjoy!
Rate: 7/10

Bill Cunningham New York
To be honest we did not have an intention to see this movie and we planned to go on a preview of coming in next week "Tinker Taylor Soldier Spy". When we saw the queue to get the tickets and to get in the cinema hall we changed our minds. We had to go to what was available at the same time and there was "Bill Cunningham New York". We did not feel sorry we had gone to see it instead though - not at all... On the contrary... Next time you visit NY be aware - your steps are followed by an old man in blue removalist jacket who parked his bike close by, on the side street. Humble living in almost a hole in Carnegie Hall apartments he is the man who literally dictates the fashion trends. "We all get dressed for Bill," says Vogue editrix Anna Wintour - "or he ignores you which is death". Does he ignore hierarchy in the society? - well, he just treats it all the same. You do not have to be eccentrics, but standing out will do. Yellow, red, green, checked and unchecked, striped or unstriped, chained or hatted - whoever you are Bill love you and NY Times magazine love him. Bill would not turn his camera on you if you are ordinary dressed like Catherine Deneuve (oh, sorry it was during his visit to Paris), he would not even look at you - does not matter if you are on a podium catwalking showing the last collection of Arm*ny (let's say here... some Armeny...) if this design was borrowed already from somewhere else. He has a photographic memory - he remembers every single item he photographed from 50 years ago... Oh, I should stop here not to reveal the whole story. Even if you are not into Fashion - you will love the movie as it is about HIS way of life - the life that HE chosen for himself and the one that he truly enjoys - as only freedom can be enjoyed - the rest is living someone else's life... 'Love you, Kid"
Rate: 9/10

The Descendants
I think we are making the same mistakes again. We went to see this movie believing all those good reviews that we heard in the media. In the future I say to myself we should always trust our intuition. G Clooney is not our best choice of actors. He proved it once again: he can not act at all. He plays an indifferent husband and father of two girls. Some of the movie episodes looked too over-played, too fake and too plain. We told it to our daughter last night. She said: "Oh, but he is so cute..." The answer: "Yes, he runs fast... But go in a better place to watch cute men... - to the art gallery... :o)" Our recommendation: do not even waste your time.
Rate: 4/10

Hugo
This is the best movie we watched since Harry Potter, Mary and Max, Lord of the Rings and Narnia. Too many interesting things and associations... A movie about how first movies were created, about revealed mysteries, about friendship and love, about... no, I am not telling the whole story… The world is like a huge machine – there is no unneeded details – just every small detail (us) should understand its purpose. And there are dreams everywhere – on screen they get alive… We believe this movie should be seen by every kid on Earth – so many beautiful messages are wisely hidden inside this treasure. What a picture indeed!
Rate: 10/10

The Skin I Live In
So hard to judge this movie... The director and the cast took us on a journey along the edge of a razor blade. Well, in Spanish movies you should expect the main heroes to kill themselves, everyone around them and each other to the extend that there is not more characters to continue the movie with, but I believe we forgot about this for a while believing in the main idea of the movie: no matter what you do with your skin (your physical body for this matter) - there is no way it can change your thoughts and feelings... the core will always remain the same. To add to this: despite many reviews that I read about this movie I can not take any sides on who is right and who is wrong: you never know what you would do in the situation like this... Better watch than talk!
Rate: 8/10
Displaying page: Good Advice Magazine >> Outdoors >> La Premiere >> 06
La Premiere other articles:  << 19  18  17  16  15  14  13  12  11  10  09  08  07  06  05  04  03  02  01