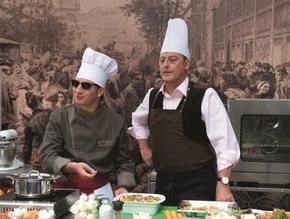 On French Humour. Endless, light, ridiculous and making you feel happy. Best part – dinning at your competitors’ place, stealing the ingredients for a new recipe and dressing up as some Japanese – very very funny… My stomach hurting from laughter…  The cinema was bursting with laughter after every remark said by the main characters…

On Love. You need to do your job as if you do it for someone you love dearly and sincerely, no matter how hard it is to imagine things. When you cook for your guests make sure your imaginary loved ones will be eating it too…

On Passion. In life you will succeed only in the things you really love and it things you are passionate about. Universe will lead you and show you the way.

On Professionalism. There is a difference in doing something as a hobby and being a professional. Hobby is something you like doing for yourself. You become a professional when you start doing things on a very high level - for others.

On Chefs’ Wars. Kitchen is usually created for one person to direct and to rule, definitely not for two . But the best shows, like Master Chef,  Iron Chef and many more appear only in competition. In the same competition the best recipes get born. When there is no competition there is nothing to improve – your food will stay plain and boring, the same as it was centuries ago. It would be death for creative people. Best ideas are born in competition but based on the experience of the past and on the best that you take with you from the past into the future.

A little bit more on New. We never heard about molecular food and cooking: blue coloured noodles, cubed duck, smoking cocktails, wines with no alcohol – what is it?

We are very grateful as these movie tickets were kindly given to us by Denmark House Management Team. We have been the Denmark House proud members for the last 4 years and we really like it. Everything was organised so well. We also deeply appreciate a courtesy of Palace Cinemas Como for giving us this opportunity too.

Going to this movie we did not expect any serious topics. We thought it would be a pure light entertainment: love, affairs, royal dresses, intrigues, betrayals and no hard feelings after all…  How mistaken we were… (This is not a question and I would put a double exclamation mark at the end of this last sentence). What do you feel when you see that you are surrounded by the most mind limited people in the world who care only about their private body parts, estates, money, power, young girlfriends, cheap entertainment, who are simply criminals, that rule this world, who control it, who tell you how to smile, where to lie down, what to read, what to think and how to dream. Pity you are pregnant already from one of them who is playing the dumbest out of all for the sake of his own peace and ignorance protection and unwillingness to fulfill his responsibilities (political, legal – you name it!). Dumbs will get away with anything… This should be punished even more, this is not even ignorance as he knows what he does: he likes this game. Powerless, he is never involved in the shaping and creating his country and leading it to the blooming future. His own small and cheap interests are more important for him than his people. But when you start playing you give yourself up: you play dumb in this game – you will get it. As one famous genius said: “pretend you are it and you will become it…” But it will come back to you in the most harsh way – whatever you pretend will become your ultimate truth. One day the game will get too serious for all… So the King is ending up with a cruel reply from his own Council: “Your Majesty, shut up, go and play with your negro”. But the story is not about him. His wife is a brilliant English princess who marries the King following her parents’ wish. There is so much light in her... Her story reminds us of a famous legend of King Arthur and Lancelot but there is more to it as the ending of this story is unexpected. Watch please what the Queen’s true love brings her: may be it is happiness, may be it is a disaster... But her kids should fulfill what she wished for her beloved Denmark and its people. The cost is too high though – blood and a head of her most close person… Watch how they grow together spiritually, emotionally as a beautiful couple… The movie worth watching it and not once, no matter how bitter and sad you will feel, the Light is always a winner at the end!.. It does not matter how the crowd and the authorities will crucify and blame you, the truth is always out there – and the future generations will see and appreciate what you have done for them…

To add to this: the actors are all fabulous, well defined characters, the costumes are – head over toes especially I loved the earrings as the camera always takes the best close shots: the back of the neck, the face, the eyes… Amazing work of art it is!

Crazy, hilarious, sad…  - they were three words that penetrated our minds for the first ½ hour watching the movie. After that everything got changed with double ‘crazy’ words still attached. It is crazy to work in such environment surrounded by and getting exposed to lots of negativity. You start to believe that it is all real and it is you. In a nutshell you see that those who defend us are defenceless themselves: be it family, work or anything else. Crazy movie - well done though! I really loved and remembered the part when one of the female officers yells on the guy dressed in white clothes exhibiting his religious believes (both the officer and the accused speak the same language): “show in Koran where does it say that ‘you can first molest your daughter, then force her to marry the person she does not like’ and show me also where it says ‘women can not work’…” It made lots of people in the cinema laugh.  The whole movie though is just one step out of the opened window….

The tickets were kindly given to the club by Curious Film Distribution.

Where do we go now?

How strange and sad... All the wars are religious. Men start them. Women can not start them, they can be the reasons for wars though but they never start them. It's not within woman's nature to kill and to be a warrior. I have to say that no matter the movie's main line is a war between religions the movie itself is pretty balanced, peaceful and calm. There is one more line (not line, but underline): media and its role in people's opinion, arguments and false motivations. It was not pronounced but the women did everything to get rid of  the false media propaganda: newspapers burnt, radio and TV disconnected on time. No media - less talks about which religion is right and which is wrong. How smart! It does not need much to start a war. At war no one knows who is right and who is wrong - everyone is right and everyone is wrong... I really loved the music, the songs selection and the colors.and shades (in clothes, in surroundings etc) which all were a real great addition to a story plot..