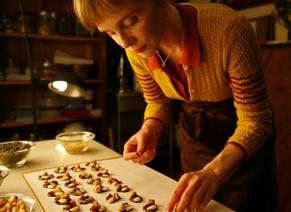 Being proud members of Melbourne Denmark House we had an opportunity to participate in Denmark House competition to win a double pass for Headhunters that was run last week. We were very lucky to win a couple of tickets to see this wonderful movie. Our short review is pubished here. We are very grateful to the Denmark House for such an opportunity.

There is another master piece of Norwegian cinematography. And the movie was exactly as we expected: there are lots of violence with blood leaking from all possible places, brains on stones, smashed fingers, corpses on tables, morgues with frozen bodies, knives in the kitchen and in the bodies, revenges for love and money, super evil plans, unstoppable clumsy tractors and fast trucks, suspicious detectives, 30mln dollar houses, betrayals, well paid jobs that are given on the base of crooked agreements, police officers trading and involved in shady sexual affairs, people diving in sh^t (excuse my French please) for life and gold; beautiful blonde women, incredibly lucky criminals, priceless diamonds as presents at dinners (with no special occasions), true love and untrue love, priceless art pieces and shooting, shooting, endless shooting through out the whole movie.... and well… the hunt is on… you need to see it to get the feeling... Very well done action movie with a good story line and good messages.

Rate: 8/10
My Week With Marilyn
A young Colin Clark (Eddie Redmayne) just graduated from Oxford and he is very keen to make his way to the film industry. Coincidence brings him to assist a movie director on a picture called "The Prince and the Showgirl'. If you remember this movie was filmed long time ago with Laurence Olivier and Marilyn Monroe. In "My Week With Marilyn" Marilyn is on the honeymoon with her new husband, Aurthur Miller and the relationship already do not go well. Michelle Williamsis capturing not only Marilyn's manners and voice but her magnetism and her vulnerability... Colin as a young observer writes all he sees in his diary to publish it later in his book "The Prince, the Showgirl and me"... Name me one man who would not fall in love with HER... Well, trying to keep away from telling too much, this movie definitely the one to see... To my shame I realised that I watched only one movie with MM and Alex's none so we need to catch up on this too...

Rate: 9/10
A Dangerous Method
As an online subscriber of Aesop Australia website I got an opportunity to get an invitation to see A Dangerous Method movie at Palace Cinema Kino that is situated at a cozy Collins Place in the city. I applied for the double pass a bit too late and did not have any expectations when I got an email a couple of days later from Aesop marketing team manager that my pass will be waiting for me at the Aesop store on Collins Street. That was a very pleasant surprise and I am very grateful for the girls who organised everything!

The Kino cinema has been renovated since last time we went there and it looks better than ever with an open bar and snacks space, soft armchairs and relaxing atmosphere (as most Palace Cinemas do). Aesop shop is located close to the cinemas on the ground level Collins Place. Impression by entering Aesop shop was as always: a rich meadow of blooming grasses and flowers - very delicate and natural fragrance... I placed below some information about the Aesop brand that you can also find online. BTW all the movie guests were kindly given complimentary Aesop samples, courtesy of Aesop sales and marketing team that put their efforts together with the Palace Cinema Kino to organise this event.

Let's go back to the movie though... We were looking forward seeing it and we were not disappointed indeed. there were lots of young people attending the movie that was very nice to see. At Uni age we learnt a lot about Dr Freud and Carl Jung philosophy and ideas but we did not know much about their private lives, their search for truth and the practical application of their theories. Please be aware that some of your ideals might be destroyed while watching that theory does not necessarily be applicable to life's complicated situations. Not knowing much about Dr Freud and Carl Jung's bios we were also surprised to find out that despite their friendship there were lots of tension between two philosophy monsters of XX-th century, lots of arguments, disputes and disagreements. Psychoanalytics is a thin ice on a water surface to walk on as you can damage not only someone else's life but your own. What damage? May be this is not the right word as on one's journey nothing can be considered as 'damaging' but only as 'learning experiences'. Did it work for them? Were they happy? As one of th heros said: "You have to do something unforgivable to be able to keep on living..." Watch this movie about two great minds presented by best actors performances, watch it for some good healthy laughter, observing contradictions, surprises and human mistakes discovery... and enjoy it as we did... as we sometime learn from the mistakes of others...

About Aesop brand
Since 1987, when the company first launched, Aesop has not wavered from our intention to create a range of superlative products for skin, hair and body. We are committed to using the finest plant-based ingredients and non-botanical elements such as anti-oxidants, once we are confident that research has proven them effective. All ingredients are carefully selected for the benefits they bring to your skin or for their ability to improve the performance of the product. The exquisite aromas for which Aesop is renowned are an incidental treat.

Aesop values all human endeavors undertaken with intellectual rigour, vision, and a nod to the whimsical. We make every product with the same attention to detail that we believe should be applied to life at large, taking into consideration the needs of your skin, the specifics of your environment, and the constraints on your time.

We advocate the use of our products as part of a balanced life that includes a healthy diet, sensible exercise, a moderate intake of red wine, and a regular dose of good books.

Aesop has signature stores throughout Australia, as well as in Paris, London and Zurich, Hong Kong, Singapore and Taiwan, with outlets in Europe, Asia and the United States.

As mentioned above for us to watch a drama is to have an additional drama in our lives. I believe we are too sensitive and already have enough going on to watch something on the top of it that breaks our hearts. We try to avoid such movies. As one said you know what it feels like to go at night to some bad areas in Chicago why would you still do it again and again? It is like a poisonous pill. You know that you will have pain when you swallow it but you still keep doing so. Despite our emotions and deep frustration about the story that was shown, the movie is excellently done and deserves the best marks on many parameters. It describes the relationship not only with the strangers, people that we casually meet everyday but our relatives and family. It is very moving to observe the laws of honesty and religious believes that people follow and what it leads them to. It shows that all human relationship are fragile and not only the family bonds. Fragile are all of them. One word can destroy you, one action can make you fall low and one wrong sentence can be read in different ways... It is also very interesting to observe the energy which is so unfamiliar to our culture and how it develops. You also keep asking yourself what would you do it this or that situation yourself would it happen to you and so on and so on... The movie is definitely distinct and different from what we have seen so far. I try not to go too deep in my analysis so I won't bore you and won't tell you the whole story at the same time. Please watch it for yourself to find out...

Each trip to Palace Cinemas is so awarding! We have been invited recently to a preview to see a new French movie called Romantic Anonymous. We never underestimate French comedies especially when they are made with such love and grace. You will recognise yourself in the main characters - this is for sure. Very grateful to the lightness and entertainment French directors bring to the cinema market 9the latter is not the right word for such art though). You need to believe into beauty to create something like this. As an experts say love, chocolate, laughs and emotions all go well together... Apart from receiving delicious chocolates on the day we were treated with free movie passes to see Trishna movie (a present from Palace Cinemas) meaning that we will be back with our reviews soon... So the rate from both of us would be